You are here: Home / How to use a contract to protect your invention?

The various areas of intellectual property protect ideas and inventions in various ways.  Patents can’t be used as a substitute for another kind of IP.  Similarly, a contract can protect your idea in ways that a patent can’t.

A patent cannot do any of these things.  Only a contract can do these things.  A contract is an agreement with those you have direct contact with, such as investors, independent contractors, employees, and manufacturers.

Below are basic agreements that an inventor may need when they launch their product.  They help to control the actions of those that you will interact within your business.  The four basic agreements are:

The following are rough guidelines to help you spot the issues that you might encounter when using these contracts.

You can find many of these basic intellectual property contracts online for free and also purchase these contracts from legal form providers.  However, be careful that the forms do not give you a false sense of assurance.  There is no such thing as a standard agreement.  Each agreement is different, and slight differences can significantly change the meaning of the agreement.  The differences may look harmless, but the devil is in the details.

You should be aware of and understand the risks involved.  Get the advice of competent counsel who can provide you with the right agreement with the right language that is right for your situation. 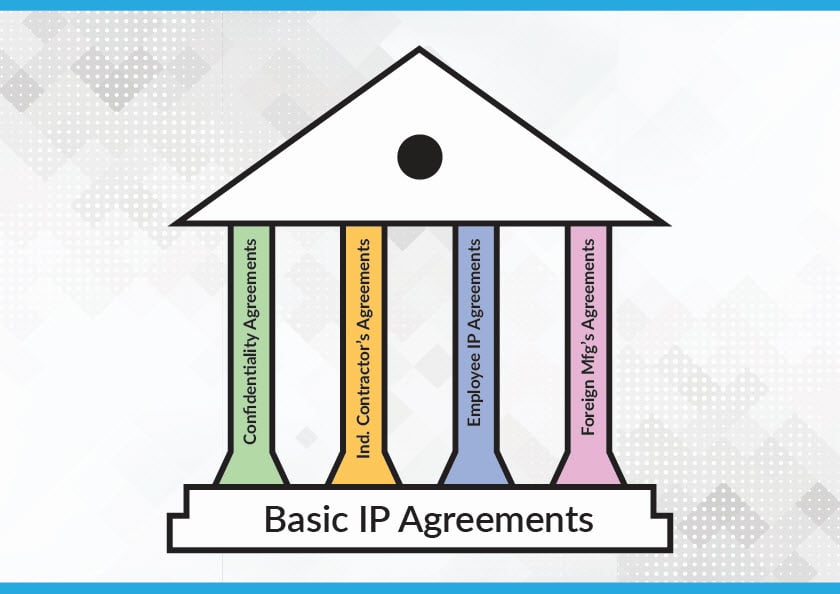 I. USE NDA to pitch an idea to investors

A non-disclosure agreement (NDA) is one of many types of intellectual property agreements.  It can limit the recipient’s ability to use the idea or invention.  For example, the NDA could expressly state that the recipient can’t exploit the idea for themselves but can only use it to evaluate the idea.  In this regard, you can pitch your idea to investors without filing a patent application if they are willing to sign an NDA.

The confidentiality agreement is a type of IP agreement. A clause in the agreement may require the recipient to maintain the secrecy of the information and to use it only for specific purposes.  For investors and potential business partners, the specific purpose is normally “evaluation” of the idea or invention. It usually prevents them from taking the idea and incorporating it into their business or product line.

The following is a snippet of a permitted use clause.  when an investor, buyer or potential licensee is evaluating an invention, patent rights or some other intellectual property of an inventor.

The Receiving Party agrees that it shall use all Confidential Information solely for the Business Purpose set forth in this Agreement.

The discussion below explains the pros and cons of pitching your idea with only a confidentiality agreement and without establishing patent pendency.

Nondisclosure agreements are cheap and fast

For many people, filing a patent application is not an option. The costs are just too much. However, they need an investor to help them with the expenses of launching a product. If you are in this situation, then it might make financial sense to use a non-disclosure agreement to pitch your invention. This suggestion is especially true if you want to pitch your idea only to a small number of people.

The cost of preparing and filing a patent application is significantly higher than the cost to prepare a non-disclosure agreement.  The high cost of a patent application may not be justified based on the limited number of pitches that you want to make.  If you spend money on the patent application and everyone that you pitch to declines your offer, then you may be left with nothing to show for it.

A secondary benefit of using an NDA to protect your idea is the speed of implementation.  The confidentiality agreement is easy to prepare for a patent attorney. He or she should take a day or two to prepare compared to a patent application which could take weeks to submit to the USPTO.

Downsides of relying solely on a nondisclosure agreement

Not all investors will enter into a confidentiality agreement

Pitching your idea under a confidentiality agreement is not always possible.  Some companies have a policy of non-confidentiality.  They inform and advise inventors that they are not keeping their information secret.  If the inventor wants to protect their idea, then they must do so by filing for and securing a patent application, copyright or trademark to protect your idea.  In this regard, this type of IP agreement will not be helpful.

I used to update the California practice guide for trade secrets published by the continuing education of the California State Bar. In that practice guide, we recommended that companies adopt a NON-confidentiality policy.  The reason was that most ideas would be rejected and would only create problems for companies. An NDA is like an invitation to a lawsuit.

Inventors are unlikely to enforce the contract because litigation is expensive

Some people and companies are willing to enter into a confidentiality agreement.  However, that does not provide much protect to inventors because the inventor must sue the person to enforce the NDA. The lawsuit means time and money that the inventor has to spend to get justice. In many instances, inventors will not enforce the contract because litigation is expensive and uncertain.  Simply put, why would you want to enforce a contract when you are not guaranteed to win and you will have to spend a lot of money to win?  In general, if you are starting, you won’t enforce the contract.  You will most likely go forward with a different idea.

Many exceptions to confidentiality

The duty to keep the information or idea confidential has many limitations.  For example, if the recipient already knew about your idea before you submitted the idea to them, then they have no duty to keep your information confidential.  This limitation is problematic for you because you don’t know what the recipient had in their research and development pipeline at the time that you disclosed your invention to them.  They could launch a product later on. You might believe that they stole your idea. However, you don’t know if they already had the idea in research and development before you ever submitted it to them. You really don’t know if they violated the confidentiality agreement.

No clear delineation between your idea and their ideas

Put simply, the large number of potential pitches may justify the cost of the patent application.  Patent pendency allows you to pitch your idea without having to go through the trouble of securing confidentiality agreements from everyone and keeping track all of those agreements.

Related article: Make sure that you own the invention rights

For anyone that will be creating drawings, artwork, engineering designs for you, they need to sign an independent contractor’s agreement.  In the agreement, they promise to assign to you any inventions and/or copyrights that they create based on the work that you are paying them to do.  This group of people and companies can include manufacturers, engineers and designers.  They should be treated differently than investors and future business partners.  These are people that you will be paying for their creative services.  In this regard, you have the right to ask for certain things in return, namely, an invention and copyright assignment agreement.

How to handle an independent contractor that does not want to sign the agreement?

If they are unwilling to sign such an agreement, you need to decide if you are willing to have them be the sole source manufacturer of your product.  Other solutions may exist if the independent contractor does not want to assign you their invention rights, if any.  Consult with your patent attorney on how you might be able to solve this issue.

As businesses begin, they usually start with a close-knit group of people.  Such ties can often falter when they realize that the ideas, inventions and copyrights that they use in the business do not entirely belong to the company but to the individuals themselves.  The company might have a shop right to use the ideas, inventions and copyrights.  However, the company would be very limited in its ability to expand if the intellectual property was not assigned to the company, causing the rights to be fractured and thus devalued.

You need to have your Chinese manufacturer enter into an independent contractor agreement.  Otherwise, they may steal your intellectual property because their actions in China will affect your rights here in the United States and in other foreign countries.  The discussion below relates to the types of intellectual property agreements you need for a Chinese manufacturer.

Chinese manufacturers are becoming more patent savvy.  They sometimes file their own patent applications on the products that they make for their clients, in China and sometimes elsewhere.  In this regard, you may need to have one or more types of intellectual property agreements to protect yourself from these situations.  For example, if you order a product from a Chinese manufacturer and they file a patent application in China before you file one here in the United States, the first filed patent application which would be the one filed by the Chinese manufacturer would be prior art against your second filed U.S. patent application.  Thus, not only would your product be unfairly excluded from China, you would be unable to get a patent in other countries. This is unfair.  You probably have a lot of good arguments to present to a court of law.  However, would you be willing to spend the money if you aren’t guaranteed to win the case?  No attorney will guarantee that you will win the case.