You are here: Home / Patent application process / After Patent Grant / Licensing / Is it easy to sell or license your ideas and patents?

Many people call me and tell me that they want to get a patent so that they sell it or license it to make money.  If this is you, continue reading. 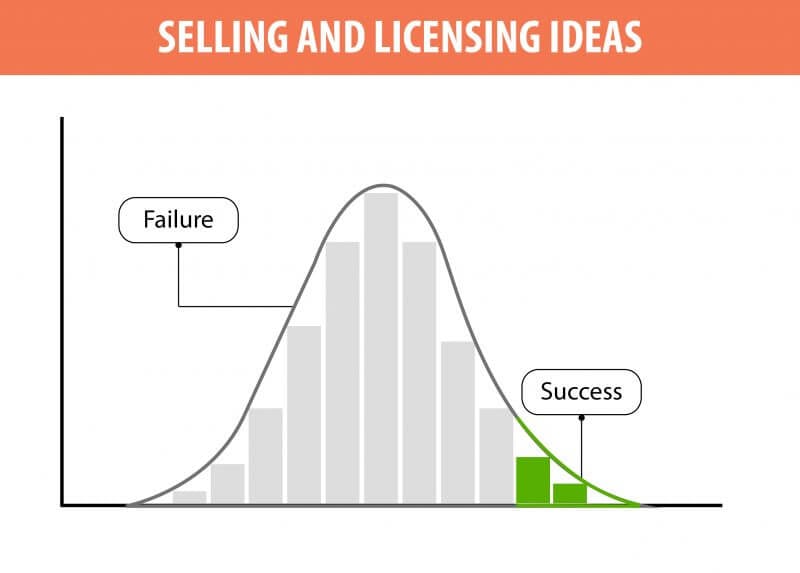 The above graph illustrates the probability of success if you were to start a business of selling and licensing ideas.

In theory, this strategy of patenting and licensing ideas to make money is possible.  However, life is rarely about theory but whether it is practical.  Is it statistically possible?  You can make money this way but it is rare to do so.

Before we begin, let me explain what I’m not talking about.  I’m not talking about selling or licensing a patent based on a viable business.  For example, let’s say that an inventor gets a patent, builds a business out of the patented technology then licenses or sells the patent.  People in this situation have two tremendous things going for them.  First, they have proof of concept.  Their idea works.  Second, they have evidence of market demand.  They built a business where consumers are buying their patented products.

I’m referring to selling or licensing ideas as a business model in and of itself without more.  They have no proof of concept, no proof of market demand, no track record of success, no patent.  All they have to offer is just an idea.  In this regard, in my opinion, it is statistically unlikely to patent then sell or license only an idea without more to another of any significant value.  It may happen, but, in my opinion,  this is not the norm.

1. How to sell or license an idea?

The basic strategy is to come up with an idea that you want to sell or license then offer it to someone.

Now, just because you have an idea, that does not mean that you could just offer it to someone.  You’d have to protect it before you tell others about the idea.  Otherwise, the other person would steal it from you.

They would use it and thank you quietly for it.  You’d have to prove that they took your intellectual property rights in court.  Was it only an oral contract?  Did you come up with the idea?  Did the person already have the idea?  The chances of successfully suing the person are slim, and the funds required would be significant.

A. Protect the idea with a patent

A strategy of securing your idea with perceived ownership can fail. This approach is based on hope. You are hoping that other people would respect you so much that they would prefer to work with you then file their patent application.  In my opinion, most people would ask to see your provisional patent application before buying the rights to your idea.

Additionally, what happens when they ask you to see your patent application? If it is skimpy, they may leave if they feel as if you lied to them about the strength of your patent protection.

B. Protect the idea with a nondisclosure agreement (NDA)

Another way to tell others about your idea would be to enter into a nondisclosure agreement. Here is an extensive discussion on NDAs: What is an NDA and when to use them?

What NDAs do is limit the other person’s ability to use your idea.  The NDA should limit the use of the information to the evaluation of the concept.  Moreover, as the title of the document suggests, the other person can’t disclose the idea to others.  They can’t even file their own patent application because the patent application would go public and that would be a breach of the NDA.

C. Do both – protect the idea with a patent and NDA

The third way to tell others about your idea is to do both – file a patent application and make the other person enter into a nondisclosure agreement.  The reason that you might want to do both is that they both protect different aspects of the process of selling and licensing your idea.

However, unlike the patent system, if they breach the agreement, you have to spend the time and money to sue them.  Based on my experience talking with people, most people won’t sue on a breach of contract unless the likelihood of winning is high and the costs are affordable.  Litigation is never a high likelihood of success, and it is not cheap.  First, anything can happen during litigation.  Most litigators will estimate the chance of winning at 50%-50% because of the unpredictable nature of litigation.  Next, you’d have to pay a litigator tens of thousands if not hundreds of thousands of dollars.  With odds like these and the high costs involved, simply put, people will not sue another person based on a breach of contract.  You should still try to have the other person enter into the nondisclosure agreement because it adds another way to sue them.

Hence, you may want to do both – file the patent application and get the person to sign the nondisclosure agreement.

Fortunately, a patent application is not dependent upon the other person.  You can do this unilaterally.  You should do it before you tell others about your idea.

2. Why it will be difficult to sell or license just an idea without more?

The strategy above sounds simple, but you might wonder why I don’t believe that you can make money as a pure broker of ideas.  Remember, I’m not talking about businesses with sales for a patented product.  I’m talking about those that sell or license the patent rights along with specialized know-how or personal relationships.

The simple reason that the above strategy won’t work is that no one wants to pay you money for your idea unless they have to.  You have to have a broad patent so that they understand that it will be difficult to get around.  Specialized know-how or a personal relationship may also help to make the sale or license deal happen.

You can’t always protect your idea with a nondisclosure agreement. The other party must sign it for you to get contractual protection. You also have to spend a lot of money to enforce your contract rights if they breach the contract. Litigation is expensive, and most don’t do anything if someone breaches the contract because they might lose.

Now, here comes the real trouble with trying to protect your idea with a patent.  It is the high cost of securing a quality patent.

A. Problem with protecting your idea with a patent

i. Broad patent protection is needed

For the patent to be valuable, it has to have broad protection.  As a patent attorney, I regularly conduct design arounds for my clients.  I instruct my clients how, in my opinion, they can avoid patent infringement by making a change to the product.  The cost of my services to suggest a design around would be significantly cheaper than paying you a sales price or ongoing royalty for your idea.  Many clients would rather pay for a design around than pay the patent owner an ongoing royalty.

If you don’t get broad patent protection, then you will not be able to sell or license your patent.  Do you want to risk the substantial cost to get a patent without any guarantee of payback?  Most people won’t risk this amount of money, and I don’t recommend it either.

Now, you can lower the cost of the patent application by doing it yourself (DIY).  However, in my experience, most DIY patent applications either fail or has very narrow protection.  For example, during prosecution, the examiner at the patent office will help them to write the claims and give suggestions.  However, inventors that rely on the examiner’s advice do so at their peril because examiners are not looking to claim breadth.  They are focused on patentability, which is a related topic but not something that the examiner is fighting for you.  A patent attorney would fight for the breadth of patent protection, but the cost to retain an attorney is high.

Very rarely, some people can get good patent protection by doing it themselves.  But, in my experience, that is rare.

B. Problems with protecting your idea with a nondisclosure agreement

The benefit of the nondisclosure agreement is that it is cheap. It is very cheap compared to the cost of a patent application.  However, the downside is that you have to get an agreement from the other person to sign the contract.  When clients seek my advice on NDAs, I recommend that they don’t sign nondisclosure agreements unless they really have to get some piece of information. The NDA is an invitation to a lawsuit. Don’t sign it unless there is no way around it.

A business that sells or licenses ideas and patents is not feasible because of the high cost to get a quality patent. Most would have to hire a patent attorney to get a patent of high quality.  But the rate of rejection from potential buyers and licensees would cause you to spend money faster than you would make it.  A nondisclosure agreement might be used to tell others about the idea. However, you’d have to spend a lot of money to enforce the nondisclosure agreement which many won’t do.

Should you have any questions or comments, please do not hesitate to contact me.