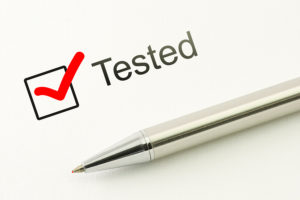 Before we discuss the particulars of Polara, let us see how the issue arises and the risks involved in public testing before filing a patent application.

Public use and experimental use exception

Sometimes, inventors and businesses might have a need to publicly test an invention before establishing patent pendency (i.e., filing a patent application).  The most popular litigated case on this for patent attorneys is the City of Elizabeth v. American Nicholson Pavement Co.  In City of Elizabeth, the inventor secured a patent directed to a roadway pavement.  To test the safety of the invention (i.e., road), the inventor built a public road and allowed cars to use the invention.  The inventor also had to test the road for a long period of time, specifically, more than one year.  The inventor had tested the product in public for more than one year before filing a patent application.

Fortunately, for the inventor, the public testing of the roadway qualified as an experimental use so the use in public was not considered a “public use.”.  In particular, US patent law does not consider the start of experimentation as the start of public use which would start the one-year time period.

The Federal Circuit identified factors relevant to determining whether a use is experimental in Clock Spring, L.P. v. Wrapmaster, Inc. (Fed. Cir. 2009).  The nonexclusive factors are:

I discuss below how these factors relate to the instant Polara case.

Be warned that should you test your product out in the public and leave it out there so that the public can still see the invention after you know that it works, the one-year time period will start.  You cannot assert that your use in public falls within the experimentation exception indefinitely.

Market testing is not experimental use

If an invention is publicly tested for more than one year, then alleged infringers will argue that the public testing really is not experimental use but rather turned into a public use once the inventor realized that the invention work.

In other words, when the inventor sues a defendant, alleged infringer, or competitor, they will always argue that the invention was ready for patenting and that the one-year time bar had lapsed before the inventor or business filed the patent application to invalidate the patent.  Even if your public testing clearly falls within experimental use exception, why wouldn’t they make that argument.

Put simply, publicly testing an invention for more than one year without first establishing patent pendency, invites the invalidity arguments and expenses raised in City of Elizabeth and Polara.

If the company has the funds or if the potential revenue of the invention is too large to take the risk, then the cost for securing patent pendency prior to public testing should be considered just a cost of launching the product.

If it came down to litigation, the cost to litigate the issue of whether the public testing qualifies as experimental use will cost the patent owner significantly more than the cost of serially filing patent applications to protect the invention and any improvements.  The patent owner will spend hundreds of thousands if not millions of dollars litigating the issue if the alleged infringer feels that they have a good shot at invalidating the patent and not paying royalties or the inventor’s lost profits.

The bottom line for high-value inventions is to be cautious.   Patent prosecution has many goals.  One of the goals is to mitigate potential arguments that might be raised during litigation.  You can try to rely on your opinion that public testing qualifies as experimental use but opinions differ among reasonable people.  However, by spending a little more money by first establishing patent pendency before publicly testing, the inventor can mitigate or eliminate the associated litigation expense on this issue.

Risks based on first inventor to file rule

With the enactment of the America Invents Act (AIA), the United States went to a first inventor to file rule.  The AIA created additional risks when relying on the experimental use exception that did not exist pre-AIA.

First, if a competitor or a third party views the public testing and files their own patent application on an improved version, then under the first inventor to file rule, the third party will be awarded the patent and not the original inventor.

This is a new patent office rule or procedure which has not been litigated.  Patent attorneys just don’t know how the patent office nor the courts will rule in any specific situation.  Put simply, inventor beware if you are relying on these new rules or procedures.

Polara is a manufacturer of accessible pedestrian signal systems (“APS”) for a crosswalk.  They had invented a two-wire version of their prior eight-wire system called the Navigator.

Polara tested prototypes of the two-wired version of the Navigator.  First, they did so in their laboratory.

Next, they tested it publicly at an intersection in Fullerton, California.  After overcoming some problems at this location, they uninstalled the unit.  They then installed the improved system at a busier intersection in Fullerton which was left in place until they filed the patent application which matured into the patent at issue (i.e., USPN 7,145,476).  These installations are referred to as the first and second installations and were installed without a nondisclosure agreement in place.  Even though the first and second installations were installed without a nondisclosure agreement, no one outside of Polara had access to the invention or could tell how the invention worked by merely looking at it, even the city workers. Fullerton was close to Polara’s office and they had full control of the invention.  They installed and monitored the invention.

Polara also later tested the invention in Canada.  However, this installation was done under a confidentiality agreement.

The Federal Circuit affirmed the district court’s finding that the first and second Fullerton installations qualified as an experimental use primarily based on the first factor, the need for public testing.  They stressed the importance of testing life safety equipment.  The Federal Circuit also appeared to appreciate other facts of the case and how those other facts favored the inventor or patent owner.

The basic recommendation to companies that want to publicly test their invention before filing a patent application is to not do so.  If funds are available, they need to identify the core inventive aspect and at the very least, prepare and file a patent on the core inventive aspect(s).  If funds are tight, they need to pick and choose which aspects of the invention they want to file on.    I do not think that it is sound advice to just publicly test and try to rely on the experimental use exception to the public use bar and the one-year time period.  Taking this approach appears to invite litigation instead of mitigating it.