You are here: Home / Worldwide patents / Foreign patent filing to secure protection in other countries

To secure patent protection in other countries with a foreign patent filing, inventors must file a patent application prior to public disclosure of the invention to others. Public disclosures come in the form of websites, offers to sell, investment solicitations, tradeshows, public demonstrations, message boards, and other situations where information on the invention is distributed without any (written) obligation to keep the information secret. These disclosures arise in typical marketing efforts by startups.

If you start your marketing efforts before filing a patent application, then in most foreign countries, you cannot seek patent protection with a foreign patent filing. Many foreign countries require absolute novelty for you to seek and be granted a patent. Absolute novelty requires no disclosure, anywhere in the world, before filing an application for a patent on the invention.

What is a PCT application or International Patent Application? 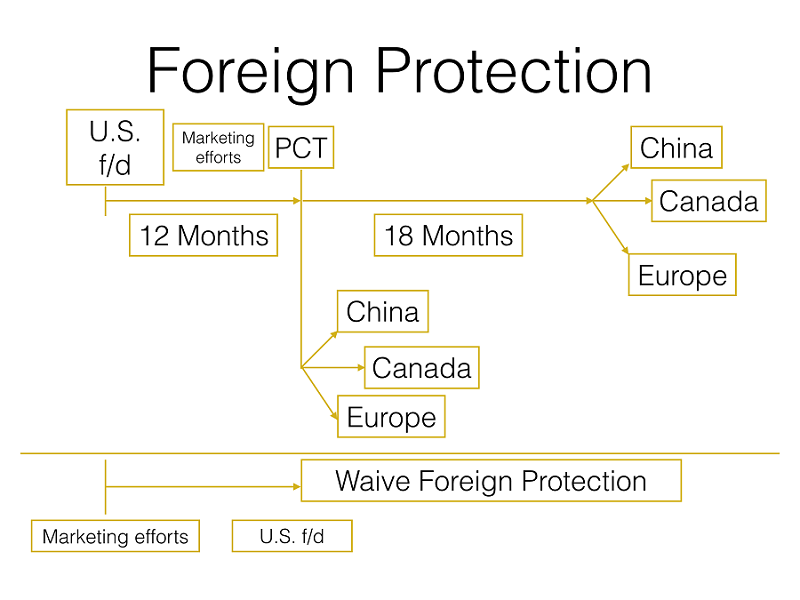 The cost to file in each of those individual countries or regions will cost about the same as the cost to prepare and file your U.S. patent application. As such, it is expensive to file directly in foreign countries at the end of the 12 month period. Moreover, most inventors and companies have not yet decided which countries they would like to enter within twelve months. As such, many entities choose to file a PCT application. Larger entities with established distribution channels may choose to file directly in known countries of interest.

CONCLUSION: FILE PATENT APPLICATION PRIOR TO START OF MARKETING EFFORTS

The bottom line is that, in the beginning, preserving one’s ability to seek foreign patent protection does not cost more. All that is required is that one file a patent application prior to any sort of public disclosure or marketing efforts. Moreover, this pre-marketing filing strategy is already the recommended course of action due to the implementation of the first to file rules under the America Invents Act.