Similarities and differences between provisional and nonprovisional patent applications

The sections required for both nonprovisional and provisional patent applications are marked with an “X” below in Table 3. 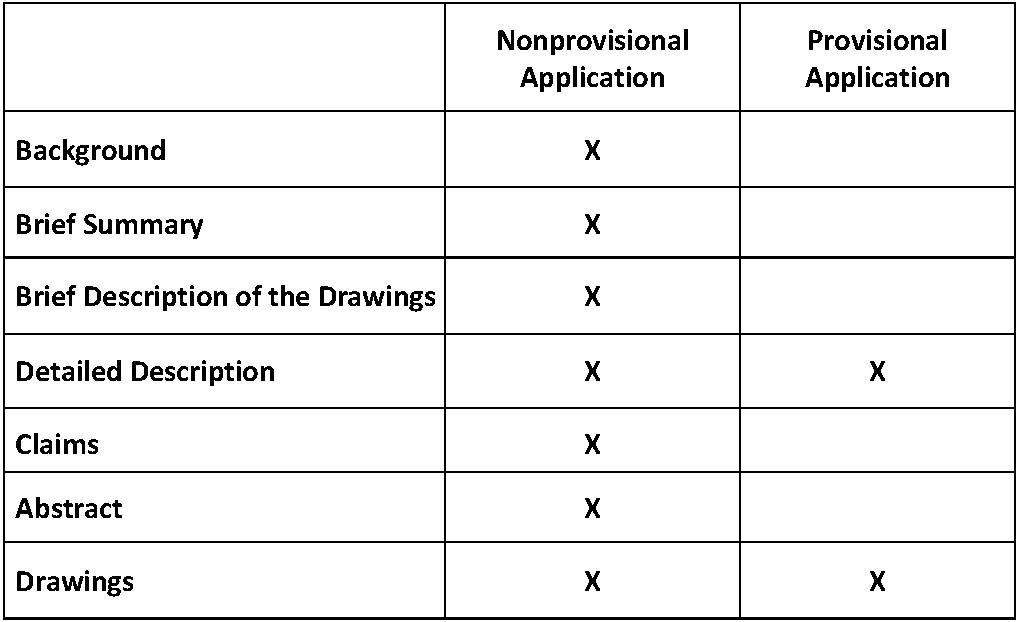 A well-prepared patent application should disclose the invention’s point of novelty as well as other variants and options. For example, if part of the invention includes a screw fastener, the Detailed Description should likely include other types of fasteners including nails, latches, clips, etc. It should not describe only what the inventor invented, otherwise the description may be too narrow and the full scope of the invention may not be adequately protected by the patent.

An improperly prepared patent application may prohibit an inventor from securing effective protection for an invention. Although patent attorneys are fallible, the quality will be better than if inventors draft patent applications themselves.

I have reviewed many applications prepared by inventors and many are poorly written, do not address the proper points that need to be addressed, and fail to include essential information about the invention, such as the point of novelty. Often, if inventors choose to prepare a patent application without help, they reach out to a patent attorney only after encountering problems later. At that point, a patent attorney may require significant time to fix the issues. This will cost a significant amount of money to fix and meet the inventor’s end goals (such as receiving broad patent protection to sufficiently protect the product), if it is even possible. Utilizing competent patent counsel from the very beginning mitigates these issues.

To be clear, I am not against using a provisional patent application to establish patent pendency. There are, in my opinion, strategies for utilizing the provisional patent application (see Chapters 4 and 7). If an inventor is going to expend the time and money to secure a patent or launch a business, the process of securing the patent should be done properly. Moreover, this process is not cheap despite claims found on the internet. If an inventor tries to cut corners, the costs of going through the patent process may be much higher than expected in the long run and not worthwhile.  Hiring a  competent  patent  attorney  might  require  a higher, initial investment, but will likely save time and money with  better results.

12. The “minimally competitive alternative product” refers to the bare-bones essence of the invention and how it      works. It may also be described as the invention’s point of novelty or the point of departure from what is already known in the prior art or existing

13. The Claims Section is a difficult and sometimes time-consuming to prepare and requires an experienced attorney to prepare competently. For example, a full Claim Set may include (1) claims directed to the apparatus and method of use and (2) claims directed to different entities that the inventor would like to stop should those competitors decide to make, use, offer for sale, sell, or import their invention into the United States. Drafting a Claims Set in a way that offers the optimal possible protection for the inventor is an incredibly nuanced process. The Claim Set may also have to take into consideration the business and marketing environment in addition to the invention itself. For more about the Claims, see Chapter 11.