A common problem in trying to broadly protect one’s invention is the lack of focus on the point of novelty of the invention. Without a clear description of what the invention is in its most basic elements, the patent application will not have a clear focus, the claims will not be broad, and prosecution may stray from the most important aspects of the invention.

Inventions are usually designed for a primary use (i.e., initial field of use or vertical market) but may also be used in ways beyond the inventor’s original intention. For example, a pencil may initially be designed for use in an academic setting, but upon further exploration, a modified version of the invention may also be used in a construction setting. This expanded utility increases the potential for an inventor to make money from the sale of that invention and may motivate the inventor to think of other bells and whistles for the invention and further broaden its applicability. Many inventors find this possibility exciting and may expend an inordinate amount of time and energy brainstorming ideas. They are often excited to introduce a new product into the marketplace and want to be sure they have thought through the full range of applications of the invention.

What is the point of novelty?

Identifying the point of novelty: Focusing on the invention’s benefit over prior art

To begin to understand how to identify the point of novelty of the invention, I will walk through the mental steps that I take using an example of a hypothetical mechanical pencil featured on the left side of Figure 1 below. 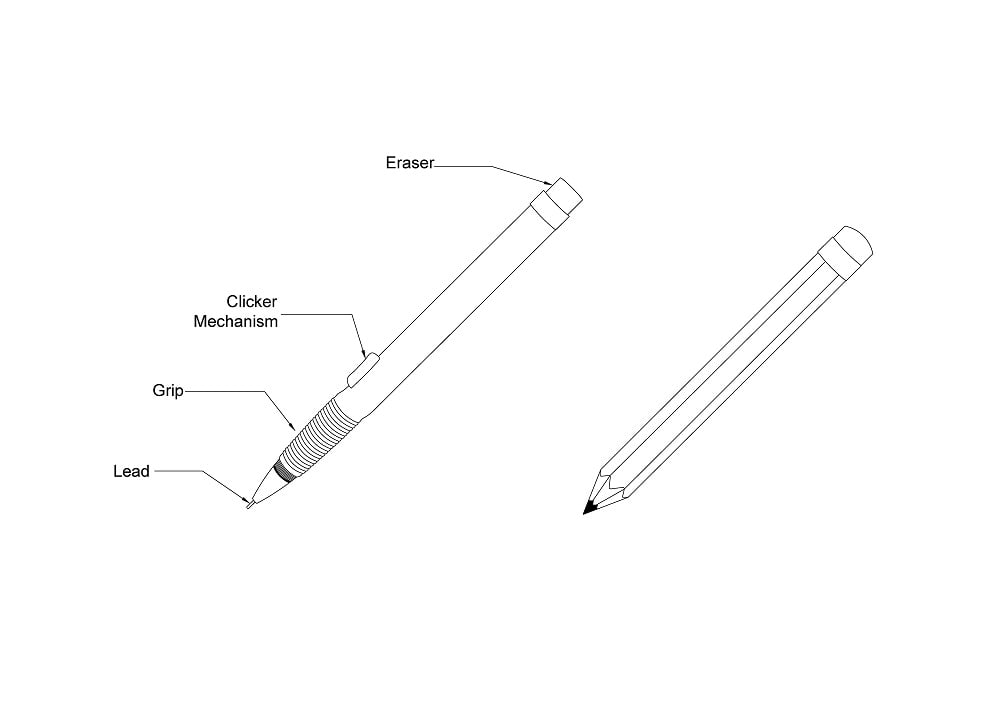 Finally, the point of novelty is also useful for identifying a minimally viable or sub-optimal product that could still be a viable competitive alternative to the proposed invention. Inventors often believe that their invention is the best in a particular metric (e.g., speed, ease-of-use, etc.). Inventors want to, and should, protect this benefit. However, inventors should also think about protecting sub-optimal versions of their inventions or products. The patent application should therefore include information related to the preferred version of the invention along with other versions that may be less optimal, but would still be able to compete in the marketplace. For example, if an inventor conceives of a way to build the fastest car and wants to patent it, and if a corresponding patent protects only the fastest car, competitors could introduce the second-fastest car at a lower cost. These companies would avoid patent infringement liability and still compete for customers who do not want to spend more money on the fastest car but are willing to spend substantially less for the second fastest. In other words, customers may choose to buy a product that is slightly inferior for a significantly lower price. To prevent such competition, patents should be broad enough to encompass products that are slightly slower or slightly less easy to use, but that nevertheless incorporate the point of novelty. This is done by disclosing and claiming the point of novelty in the patent application broadly enough to encompass the minimally viable product.

To fully understand the importance of properly identifying the point of novelty, one should understand the balance we, as patent attorneys, try to achieve for clients. On one hand, patent attorneys try to present a narrow claim that does not encompass the prior art (i.e., information that is in the public domain) or is not an obvious variant of the prior art. If this occurred, the claimed invention would be rejected for being either not novel or an obvious variant of the prior art. On the other hand, the claims must be broad enough so that the scope of patent protection afforded under the patent would adequately prevent others from competing with the inventor.

The patent examiner decides whether a claim is so broad that existing technology or information would anticipate (i.e., already includes or discloses) the claimed invention. In other words, the examiner might reject the patent application by alleging that certain prior art references show that the claimed invention is not novel or is an obvious variant of an already existing idea. A simple way to visualize this examination process is to ask whether the claim in the patent application is so broad that existing technology would infringe on it if the claim were to mature into a patent. If so, the maturation of the patent would be unjust because manufacturers of existing products would suddenly be infringing on the claims of the patent. The claims need to be narrow enough so that the issued patent would not encompass preexisting technology.

However, the goal of the patent process is to secure meaningfully broad patent protection over the invention such that competitors would find it difficult to copy or make minor modifications while avoiding patent infringement liability. Simply put, patent attorneys do not want to secure claims that are so narrow that competitors may use the invention without liability by designing around the patent. Rather, our goal is to secure claims that are meaningfully broad (not too broad or too narrow) to make it difficult for competitors to design around the patent claims, yet also ensure that the application has the ability to mature into a patent and not be rejected due to prior art.

The patent attorney needs to find the right balance so that the patent claims are not so narrow as to be easy to design around or so broad as to encompass existing technology. If the point of novelty of the invention is improperly identified, this balance may be lost and leave the inventor without meaningful protection.