The patent process is lengthy and may take one to four years to complete. Additionally, the funds spent preparing and filing a patent application are not the only costs involved in securing a patent. There are additional examination costs that should be understood before seeking a patent.

The overall patent process can generally be divided into the cost of preparing and filing the application and the cost of prosecuting a patent application. These are the two major cost centers in securing a patent. The patent prosecution costs include petition fees, costs during the Office Action–Response Cycle, fees for the issuance and maintenance of the patent, fees for submitting an Information Disclosure Statement, and patent attorney fees. 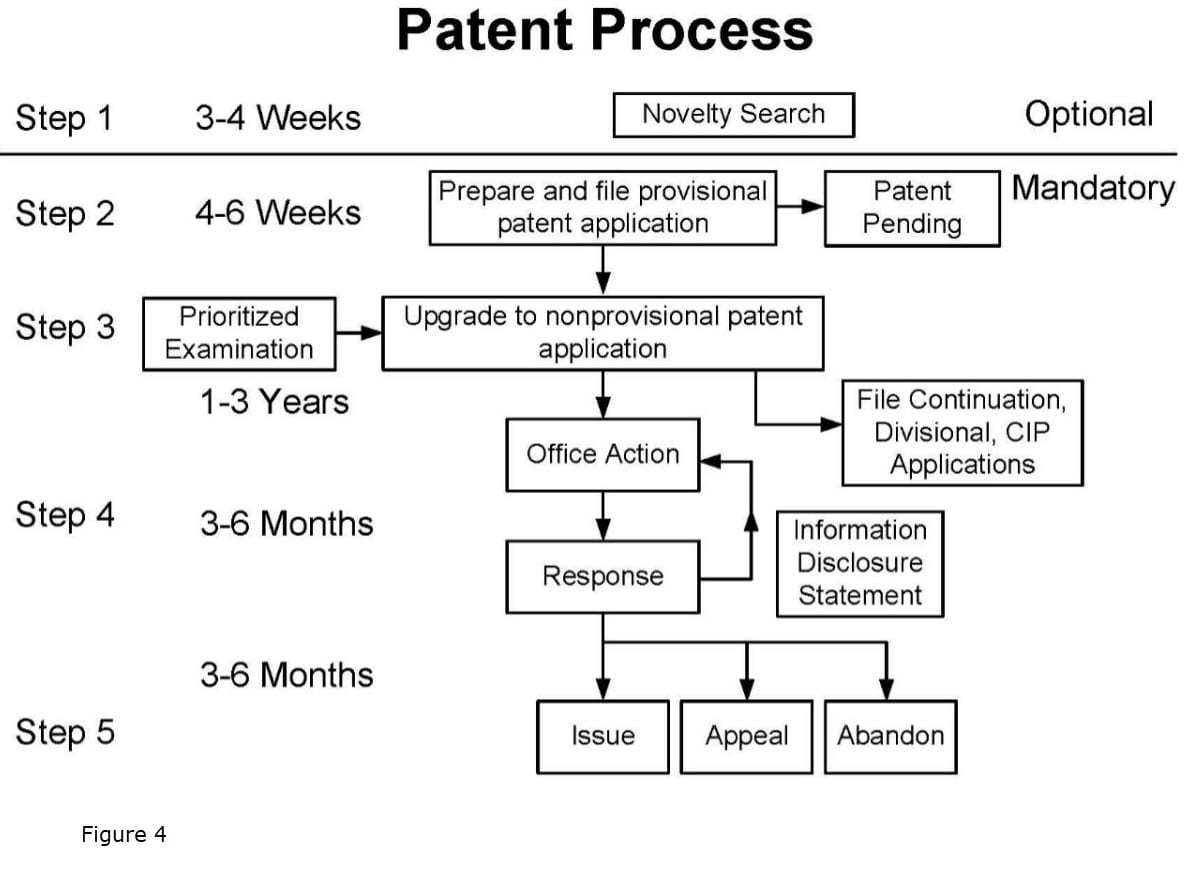 The patent process begins with an optional novelty search. A novelty search is not always recommended.  It depends on the inventor’s particular situation, as discussed in the section on novelty searches in Chapter 3.

The USPTO does not require the inventor to conduct a search of the prior art to find relevant references. It does, however, impose a duty on inventors to disclose information that is known to the inventors and that is material to the patentability of the invention. Material information is anything that the inventor knows of that might cause an examiner to reject the application for patent. If a novelty search was conducted, the results should be disclosed to the USPTO. The duty to disclose is satisfied by filing an information disclosure statement, discussed in the last section of this chapter.

If a novelty search is conducted and no prior art disclosing the proposed invention’s point of novelty is discovered, the next step is to prepare and file a patent application.

You can estimate the cost of your patent application with the Patent Cost Calculator.

An invention also has patent protection when an application matures into an issued patent. An issued patent confers an exclusionary right to the patent owner to stop or exclude others from making, using, selling, or offering their patented product for sale in, or importing to, the United States. This enforceable right enables inventors and businesses to seek damages, royalties, and an injunction on third parties who are infringing on their patents.

Remember, patent attorneys, utilize the phrase “patent protection” when speaking of both “patent pendency” and an “issued patent” without clarifying between the two. Be sure to keep this in mind when discussing patent protection with others.

Step 3: Waiting for a first office action from the USPTO and prioritized examination requests

Step 4: Office action by the USPTO and response by the inventor

Once the patent application has been examined by the USPTO, its acceptance or rejection is communicated to the inventor through an “Office Action.” An Office Action is simply the official stance of the USPTO—to either reject or to accept the application for patent. Be forewarned: about ninety percent of all patent applications receive an initial Office Action rejection. This occurs by design since the goal is not merely to obtain a patent but to secure a patent with claims that provide sufficiently broad protection against competitors (see Chapter 2) while also avoiding the prior art. After a rejection, the claims can be narrowed slightly and resubmitted to persuade the examiner to allow the application to mature into a patent. Often, a balance needs to be found so that the claims are sufficiently broad yet narrow enough to avoid the prior art and be issued as a patent.

The cost to respond to an Office Action ranges from a few hundred to a few thousand dollars. This “Office Action–Response Cycle” can be repeated indefinitely, but it typically takes one or two cycles to develop an understanding of the examiner’s position. A telephone interview with the examiner to better understand his or her position can help expedite the Office Action–Response Cycle and examination process. The telephone interview can occur at any time but is normally conducted after the first office action is received.

Step 5: Application matures to a patent, expires, or is abandoned

If the inventor is not successful in the Office Action-Response Cycle, there are several options to minimize financial expenses. If the business is lagging, the inventor may abandon the patent application. Alternatively, the inventor can appeal to the Office Action to the Patent Trademark and Appeal Board (PTAB), which usually takes a long time. The appeal is an administrative proceeding requesting the PTAB to determine whether the examiner’s decision is sound. This is a lengthy process and could take one to three years for the PTAB to render an opinion. I would not recommend the appeal process unless progress with the examiner is at a total standstill. Moreover, even if the appeal is won, the application will be remanded back to the same examiner, who can make a new rejection, though that is less likely. The recommended course of action is to work with the examiner as long as possible by addressing the examiner’s concerns, amending the claims, and providing arguments in support of patentability.

What is an information disclosure statement (IDS) for your patent application?

The duties of candor and good faith are imposed on and require the applicant or anyone prosecuting the patent application (i.e., guiding the patent application through the USPTO) to tell the truth to the USPTO. Throughout the entire application pendency or appeal, the inventor has a duty to disclose material information that an examiner may want to know when determining whether to reject or allow the application to mature into a patent. If there are facts that might cause the USPTO to reject the application, the duties of candor and good faith require the applicant to make the examiner aware of this information. If facts are misstated, the applicant must alert the examiner and correct the facts on the record. Misrepresentations or omissions made with intent to mislead the USPTO on important aspects of the patent examination can make an issued patent unenforceable.

The information should be submitted to the USPTO in the form of an “Information Disclosure Statement” (IDS). The cost to file an IDS maybe a few hundred dollars each time the inventor has new information to report. Normally, about one IDS is filed for each patent application.

The IDS form provided by the USPTO is merely a means by which an applicant can satisfy his or her duty of candor and good faith in conducting business with the USPTO. It generally contains information regarding prior art references relating to the invention including the results of a novelty search, similar existing technology, offers for sale, printed publications, or public demonstrations of the invention by the inventor that occurred more than one year prior to the filing of the patent application. As discussed in Chapter 5, this information would be relevant to the patentability of the invention and thus, material. If this information is not submitted to the USPTO, it is possible that a breach of the duties of candor and good faith has occurred, which could invalidate the patent if it is granted and if litigation occurs. Please note that the duties of good faith and candor do not require the applicant to search the prior art for relevant references. Hence, there is no duty to search the prior art, and the novelty search is an optional step.

Conversely, if any information is withheld or mischaracterized, potential infringers could allege that the patent is both invalid and unenforceable based on inequitable conduct or breach of the duties of good faith and candor, causing the court to invalidate the patent. The duty to disclose extends to everyone involved in the examination or prosecution of the patent application.