Foreign protection is recommended if there is a concrete pathway to monetize the invention in foreign markets. For example, global corporations often have established marketing channels to seek foreign patent protection and the potential for future revenues justifies the expenses. However, it is often difficult for solo inventors and startups to make money abroad. In this case, foreign patent protection may not be fruitful for solo inventors and startups. Nevertheless, one reason to pursue foreign patent protection is that potential licensees or future buyers might want to file in foreign countries. In this case, filing a Patent Cooperation Treaty (PCT) application may make sense to further preserve an inventor’s ability to file a patent application in foreign countries later.

What is a PCT Application (International Patent Application), and what are its benefits and costs? 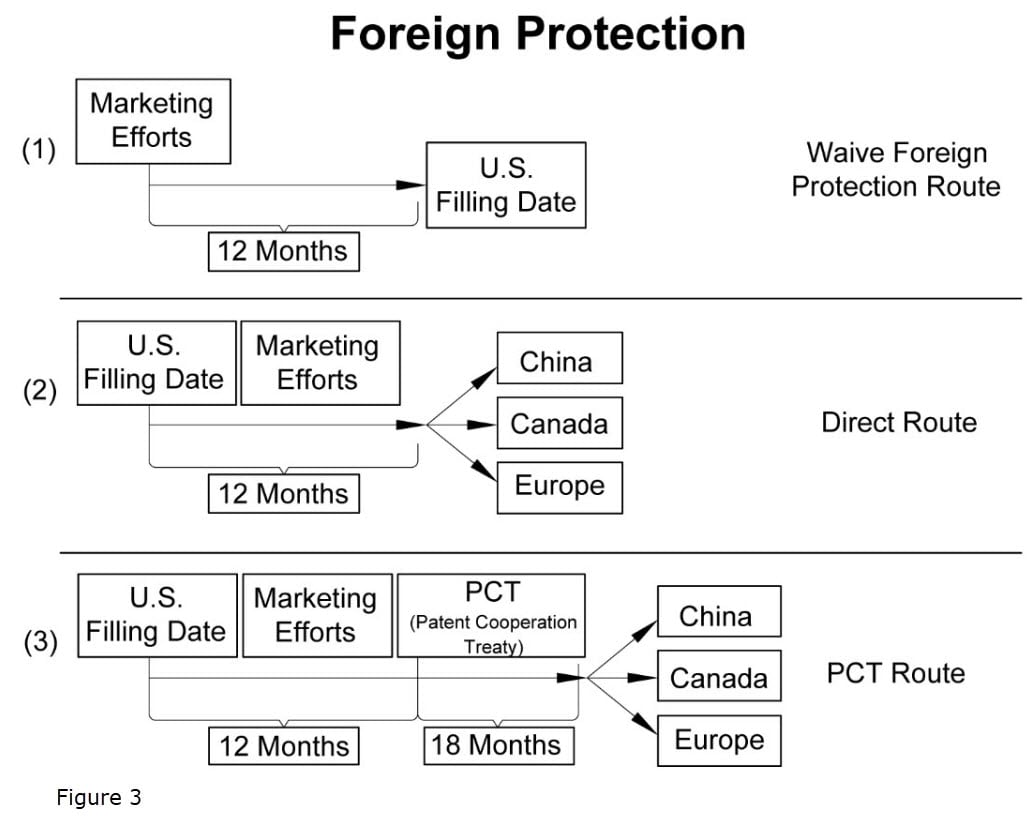 For startups, smaller companies, and solo inventors, I recommend a PCT application to preserve the ability of the inventor to file in foreign countries if there is a good reason to do so. Future buyers or licensees may find that the option to pursue foreign patent protection adds to the value of any deal with the inventor. However, due to the substantial costs of filing and prosecuting a patent application in a foreign country, good reason should exist to justify the expense of filing and pursuing a patent in a country.

Foreign patent protection is more expensive than patent protection in the United States. One reason is the cost of annuities during the national stage. Many countries require the inventor to pay an annual fee, which ranges from 500 to 3,000 dollars, to maintain the pendency of the patent application in that country. The cost of multiple annuities adds up. Moreover, the annuity only maintains pendency of the foreign patent application. It does not grant any enforceable rights that the inventor can assert against third parties. Even after the foreign patent applications mature into patents, maintenance fees or annuities must still be paid to maintain the patent grant.

The upside to keeping an unpublished U.S. patent application confidential until it matures into a patent is that competitors cannot find out whether the examiner at the USPTO is rejecting the application for patent. For example, if the inventor opts to keep the patent application confidential and the examination is not going well, a third-party cannot know that the inventor is having difficulty in securing patent protection. If a third-party had access to this information, and if the prosecution was not proceeding favorably for the inventor, the third-party may feel emboldened to start competing in the marketplace.

The disadvantage of keeping a U.S. patent application confidential is that the patent owner cannot collect damages for infringement that occurred prior to the issue date of the patent. If the patent application is published, however, the inventor can conceivably collect on infringement that occurred since publication, provided the published claims remain substantially the same as the granted claims. This is not common, however, as most claims are amended during the examination. Although important to consider, these are not usually sufficient reasons to forgo confidentially in the U.S. application process.