You are here: Home / Lessons / Core Concept 5: Three Bars to Patentability and the First-Inventor-to-File Regime (Chapter 5)

Inventors may want to market their invention first and file the patent application later to save money on legal fees. This plan, however, is problematic. If, for example, a third party files a patent application before the inventor or publicly markets the same product, the inventor would be prevented from being able to secure a patent at all. Moreover, it is possible that the inventor would discover this much later after having invested a substantial sum of time and money, which would go to waste because the third party would be awarded the patent, not you.

There are three bars to patentability: public use, printed publication, and offer for sale (see Figure 2 below). Bars to patentability specify the conditions under which the one-year time period begins before the inventor must file a patent application or be barred from seeking patent protection forever. These conditions are often associated with marketing efforts of the product. 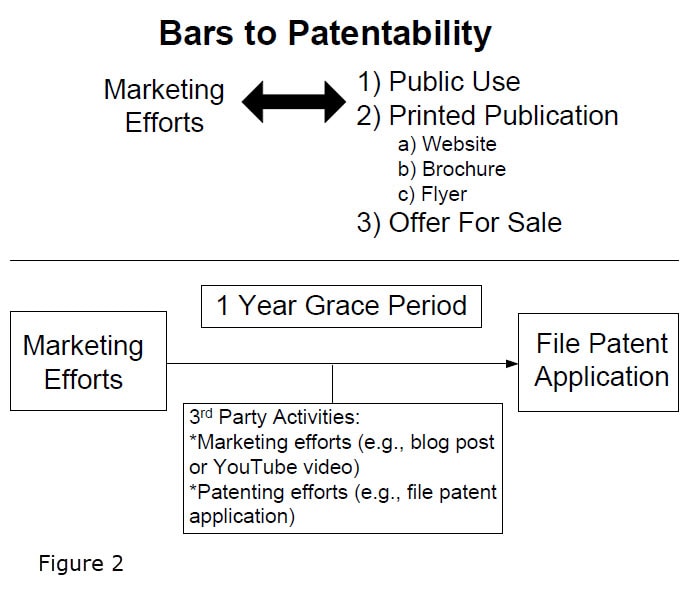 The Three Bars to Patentability: Public use, printed publication, and offer for sale

For example, in the case New Railhead Manufacturing LLC v. Vermeer Manufacturing Co.,7 New Railhead, the patent owner, sued Vermeer for patent infringement of a drill bit and a method of using the bit to drill rock formations. As part of the proceedings, the court considered the types of uses that New Railhead (the patent owner) had engaged in more than one year before the filing of its patent application that could have been considered a public use. The court considered New Railhead’s drill bit and method of using the bit to drill rock formations to be in public use even though it was used underground and out of plain sight, and they lost the case. The result of this case means that even if an invention is used where it cannot be seen by others (i.e., not openly in public), the invention may still be considered in public use. Inventors should bear in mind that even if an invention’s use is not visible to the public, it could still be considered public.

The “experimental use” exception is an exception to the public use bar. It applies when the invention is still being tested and use of the invention in public may be necessary to properly test its functionality. However, once proof of concept has been established through testing, experimentation should stop. Otherwise, any continued use may cease to qualify as “experimental use” and constitute public use, which would bar the inventor from securing the patent if the public use occurred for more than one year before the filing of the patent application. Even if an inventor is using the invention for experimental purposes, he or she should still submit a patent application within one year of starting any public use because it is difficult to know when the exception no longer applies. By filing within one year of the start of use (even experimental), the inventor may avoid potential attacks on the validity of the patent based on whether a use is a public or experimental.

An “offer for sale” is an offer from an inventor to another person or entity to purchase a product embodying the invention. Even if the potential buyer does not accept the offer, it still qualifies as an offer for sale.

In highly contested litigation, the dates on such purchase orders may be determinative as to whether a patent is valid or invalid. In Hamilton v. Sunbeam,8 the patent owner (Hamilton) sued the accused infringer (Sunbeam) for patent infringement of its slow cooker. It was discovered that Hamilton had issued a purchase order to its manufacturing vendor to build its slow cooker more than one year before Hamilton had submitted a patent application. In response to the purchase order, the manufacturing vendor indicated that it was ready to start the manufacturing process and therefore ready to sell the units to the patent holder (i.e., Hamilton). For the court, this constituted an offer of sale and Hamilton lost the case to Sunbeam because Hamilton did not file a patent application less than one year before the offer for sale date (i.e., date of the purchase order from the manufacturer).

Hamilton was not commercializing the invention in the normal sense of making a profit from consumers. However, because Hamilton had ordered units to sell them to the general public, and the manufacturing vendor was ready to sell the units to the patentee, the courts characterized the contract from the manufacturing vendor to the inventor as an offer to sell. The court ruled that this triggered the one- year period in which the inventor needed to file the corresponding patent application. Hamilton lost because the patent application for the slow cooker was filed over a year after ordering units from the manufacturer for sale.

Therefore, it is important to keep track of any “offers of sale” including the dates of manufacturing contracts for the invention, and to file a patent application within one year of any such transaction to avoid this bar of patentability.

Side Note: Another risk of using the one-year personal grace period is the potential waiver of foreign patent protection or loss of ability to  seek a patent in foreign countries. As will be discussed in Chapter 6, many foreign countries require what is known as “absolute novelty,” which requires the inventor to initiate marketing efforts after filing the patent application. The United States is a “relative novelty” country, because U.S. patent laws allow for public disclosure of the invention through marketing efforts for a limited, one-year period before the patent application must be filed.

The “first-inventor-to-file regime” dictates that the first inventor to file a patent application with the USPTO is awarded the patent regardless of who was the first to invent or conceive of the invention. The rules of the first-inventor-to-file regime (FITF) must be understood in conjunction with the one- year personal grace period because the FITF rules greatly reduce any benefit of using the one-year personal grace period.

The one-year personal grace period does not protect you against a third party that files a patent application on the same or similar idea as your invention. Under the FITF rules, they would be awarded the patent, not you. This was not the case under the prior first-to-invent regime.