The main problem that I see with inventors is when they want to use the cheapest form of Intellectual Property (IP) protection. Inventors need to realize that each form (i.e., patents, trademarks, trade secrets and copyright) protects an idea in a different way and is used for a different purpose.  It is important to not cut corners and settle for any form of IP protection but rather to get the form of IP protection that best suits the inventor’s need. Otherwise, the inventor will not be able to stop others from competing against them.

There are four main types of intellectual property rights that can be secured to protect an idea, invention, proprietary information, or work of art, and each type of protection provides coverage differently. In this chapter, a brief overview of trade secrets, trademarks, and copyrights as well as an extensive treatment of utility and design patents are discussed.

Most products can be protected by multiple types of intellectual property rights. Take, for example, a can of Coca-Cola®. The brand, “Coca-Cola,” is a trademark. The formula for the actual soda is a trade secret, while copyright protects the packaging art. The shape of the Coca-Cola® bottle is protected by both (1) a design patent and (2) a trademark (i.e., trade dress). Accordingly, it is important to parse out which aspects of the invention or idea are suitable for patent protection, trademark protection, or copyright protection and which aspects of the invention or idea should be protected by trade secrets.

Table 1 below offers a simplified way of remembering each type of protection and what it protects. 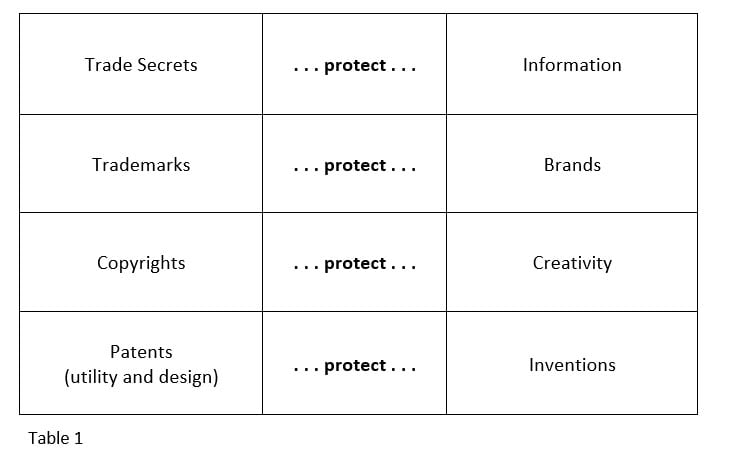 Table 2  below delineates each type of protection and the major differences between them. 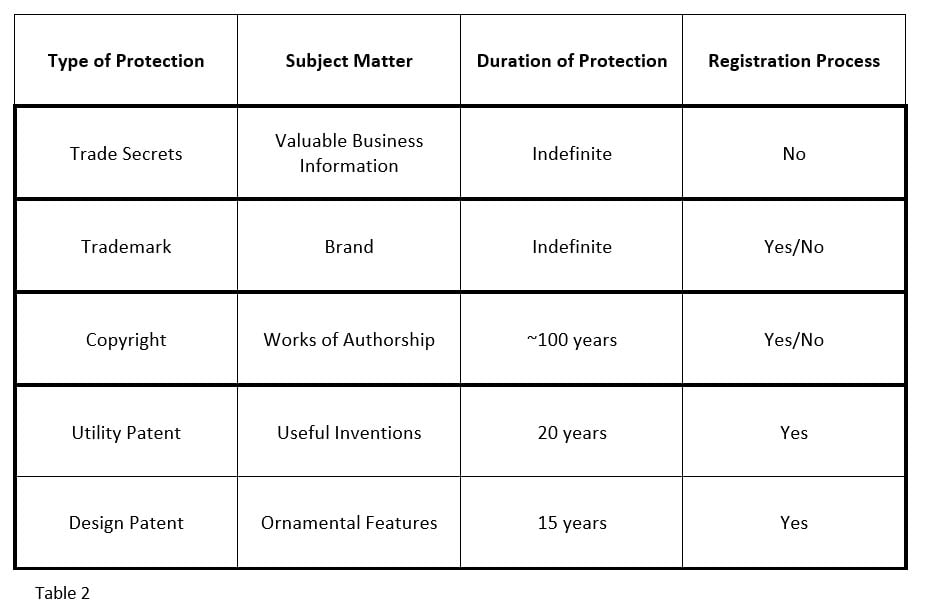 Trade secret protection may be optimal for ideas and inventions that can be used secretly and cannot be reverse-engineered (e.g., recipes). Generally, trade secret protection is not optimal for mechanical or software products since both utilize a user interface that is available to the public and can therefore be reverse-engineered. Most inventions start off as trade secrets. Inventors are often initially hesitant to reveal their inventions to others, including their patent attorney, and I respect their attempts to maintain the secrecy of their inventions.

Besides the invention itself, other aspects related to the business may be protected as trade secrets. For example, the business plan and computer-aided drawings of the invention (including, but not limited to, its tolerances and critical-sizing aspects) may not be eligible for patent protection but may be protected by trade secrets. However, the invention will eventually be marketed and will no longer be a trade secret. As such, other forms of intellectual property (i.e., trademarks, copyrights, and patents) should be filed so that competitors do not copy the idea without authorization.

Trademarks protect brands. The inventor may have a name that will be associated with the product or a service mark associated with a service, which is called a trademark. Since the laws for both trademarks and service marks are similar, I will refer to all the above as products and their trademarks for simplicity. A trademark is anything by which customers can identify the product or the source of the product, such as a name associated with the product. Other source identifiers that can be protected by a trademark include sounds, colors, smells, and anything else that can bring the product and/or its owner to the minds of a consumer. The most common types of trademarks are wordmarks, logos, and slogans. If the product configuration (e.g., the shape of the Coca-Cola® bottle) or packaging (e.g., Tiffany’s blue packaging) are nonfunctional and recall the product’s maker (i.e., source of the product) in the mind of consumers, the configuration can be protected and registered as a trademark.

The order in which trademark protection should be sought begins first with the wordmark, then the stylized words, logos, and slogans. The wordmark refers to a word or set of words, associated with a product that does not have a design element attached to it (i.e., standard character mark). If the wordmark is registered without reference to the design elements, infringement would occur even if a competitor used a different design element but still used the same wordmark. The wordmark is the most important trademark registration to secure because competitors tend to infringe on, or copy, the words of the wordmark and not the design elements associated with the wordmark. This is especially common in the current online and text-based world. It is therefore usually a priority to protect the plain wordmark with a trademark registration before the stylized version of the wordmark, slogans, or logos (but if additional funds are available, one can file additional trademark applications for the wordmark with design).

Copyrights protect original works of authorship that are fixed in a “tangible medium of expression.” This means that the authored or creative work has been written down on a piece of paper, saved on an electronic storage device (e.g., hard drive, flash drive), or preserved in some other tangible format. Examples of copyrightable works include movies, videos, photos, books, diaries, articles, and software. Copyright does not protect ideas or useful items, which is the function of patents. Although software is a functional item, it can be protected by copyrights due to the creativity in the selection, ordering, and arrangement of the various pieces of code in the software.

Authored works are automatically copyrighted at the time they are fixed in a tangible medium of expression. For any work created on, or after, January 1, 1978, the term of copyright protection is the entirety of the author’s life plus seventy years after the author’s death. For works made for hire as well as anonymous and pseudonymous works, the duration of copyright is ninety-five years from publication or 120 years from creation, whichever is shorter.

It is possible for one product to qualify for multiple types of intellectual property protection, and “stacking” them may be useful.

If the inventor primarily seeks patent pendency rather than the issuance of the patent, a provisional patent application can initially be filed to delay the application from entering the queue for examination for up to twelve months, which in turn delays examination costs by twelve months.

If an inventor does not want to wait that long, he or she may file the application along with a prioritized examination request for an additional fee. This typically reduces the wait time for the first office action to roughly six months.

In sum, the provisional patent application and the prioritized examination request make the timeline of a patent application process more flexible. They can be utilized to design a shorter or longer time frame that is more suitable for the inventor’s manufacturing and marketing time table.

Situation 1: To block the importation of overseas manufacturer overruns

Design patents are useful for blocking the sale of counterfeits, the importation of overrun (i.e., excess production), or rejected products manufactured overseas for the inventor. These imports will be identical to the drawings in the design patent and, if imported into the United States, may be blocked by Customs. If these products are allowed into the United States, the importers, distributors, users, or manufacturers may be sued for infringement.

Design patents are also useful for furniture lines and other products sold in sets because buyers must purchase products that look like the original product to maintain complete sets. Doing otherwise would create aesthetically displeasing groupings of products that a potential consumer would not be interested in when expanding their current set.

Design patents may also be useful for large manufacturers that are leaders in their market. For example, Apple, Inc. obtained several design patents on different parts of its iPhone including the housing and arrangement of icons on the display. Apple, Inc. won a lawsuit against Samsung for design patent infringement when Samsung put out its own version of a smartphone with a similar design in the United States.

5  “Reasonable” steps differ based on the value of the trade secret—the more potentially valuable the information, the more steps must be taken to secure its secrecy. For example, reasonable steps to maintain the secrecy of the Coca-Cola formula would be higher than reasonable steps to maintain the secrecy of the customer list of a local injection molding company. Reasonable steps for the local injection molding company might include requesting all persons that have access to its customer list to enter into a confidentiality agreement. By contrast, safeguarding the Coca-Cola formula with only a confidentiality agreement may not be sufficiently reasonable. Because the value of the Coca-Cola formula is great, reasonable efforts would likely include the confidentiality agreement in addition to other steps including, but not limited to, dividing out manufacturing steps so that no one plant manufactures the Coca-Cola drink.

6  For inventions directed to a plant patent, I recommend seeking the advice of a patent attorney specializing in plant patents since that is outside my area of competence.