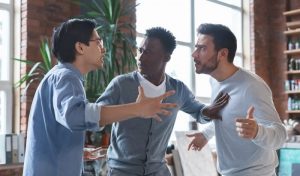 Patents allow people and companies to claim ideas and inventions as their own. Nevertheless, it is quite confusing and tricky when multiple entities are involved.  Disagreements can and do arise between the owners.  You need to know how to address these potential pitfalls.

Can multiple people own a patent? Yes, but we do not recommend joint patent ownership.  The patent’s value could be destroyed. Without permission from the other owners, any owner of a patent can dedicate it to the public, sell it, start a competing company, or license it to another company. This possibility leaves the other patent owners at the mercy of a disgruntled patent owner.

While sharing patent ownership may seem like a generous thing to do in the beginning, there are plenty of ways that things can go wrong in the end. This article will explain all the ins and outs of joint patent ownership and how to protect yourself by entering a joint exploitation agreement instead.

While it can be precarious, many inventors and investors want to own a patent together. They want to enter into a joint patent ownership situation, albeit innocently. They believe that they are protecting each other’s interest if both own the patent.

Here is how the situation arises.

For example, startups may have two patent owners: the investor and the inventor. For the layperson, it may make sense to put both names on the patent application so that they both own the patent. However, that would be ill-advised because that leaves each owner at the mercy of the other owner.

In other cases, though, there may be two inventors. An example of this is when friends brainstorm an idea. They may both be inventors because they both came up with the idea.

Before anyone gets into inventing and pursuing a patent, it is essential to know who will be involved and how they will be involved. Most relationships are quite trusting in the beginning, so joint patent ownership makes sense to most people. However, it is not usually a wise choice in the long run.

The Downsides of Joint Patent Ownership

If two or more people or companies apply as owners of the patent, everyone has joint patent ownership. With joint patent ownership, all owners have the full right to do whatever they want with the patent. This unfettered right to do as they please is a big problem.  At the beginning of a patent relationship, this usually does not cause any issues. However, that may change over time as the business pressures work on the owners.

If one owner begins to feel like he or she is pulling more weight launching the product than another owner, he or she may start to feel jaded by the unfair relationship.  If the relationship deteriorates, the disgruntled owner may start to threaten the other patent owner.  They will begin to fight.

Remember, each of the patent owners can legally sell it, use it for a new company, or dedicate it to the public without needing approval from the other owners. Any of these scenarios can quickly leave the other owners without an income or royalties from their patent.

The first step to creating a safety net around your patent is to open the lines of communication with the other owners. By discussing the downsides of personally owning the patent with your business partner or co-inventor, you both need to see the potential hazards. When the people involved see the risks, most people will quickly want to figure out how to keep everyone safe moving forward in the long run.

Entering into a Joint Exploitation Agreement

It is a simple contract which states that the patent owners won’t do certain things to hurt the other owners.  While it may feel a bit like a prenuptial agreement, it saves both parties from heartache and potential monetary ruin in the future.

Transferring Ownership to a Corporation

If a simple contract does not seem like the way to go, the owners can assign the invention to a corporation so that the corporation owns the patent. If a corporation will own the patent, then the assignment of the patent rights should be done before filing the patent application.

With this option, the operating agreement of the corporation must place limitations on how decisions are made to limit the ability of a rogue owner to destroy the value of the patent. With this in place, the rules of the company will dictate the buyout provisions if a shareholder chooses to leave.

Some benefits of using a corporation as the sole owner of a patent include:

Other Considerations with a Patent

As the patent ownership is figured out, it is essential to keep in mind all of the players in the patent game. Legally, an inventor is anyone who conceived the invention.  Even if the inventor did not physically make the invention, they are still the inventor of it. Often, there are disputes about if someone made a genuine contribution to the patent.

Because of this, both the roles of inventors and owners of a patent are often disputed and fought over. Therefore, it is necessary to make it abundantly clear in legal terms the owner of the intellectual property when it comes to patents.

Owning Patents: The Good, The Bad, and The Ugly

Patents are a fantastic thing. They allow creative and brilliant people to profit from their inventions. But, in business, people often become frustrated, biased, or upset and try to get the upper hand. Disgruntled owners can take advantage of their patent rights and easily deceive their business partners. So, it is essential to know precisely how you will own the patent rights.

If you or someone close to you is considering how they should own a patent, make a wise choice, and form a corporation or enter into a joint exploitation agreement, please do not hesitate to contact me. While it will be more work upfront, it will be the safest bet for everyone in the long run.