You are here: Home / Protect your idea when pitching to an investor, potential licensee, or buyer

Pitch your idea with Contractual protection

The confidentiality agreement provides you with a contractual right against the investor, licensee or buyer if they were to steal your invention from you or make an unauthorized disclosure to a third party based on the pitch of your invention to them.  If they utilized your idea or invention in their own product without authorization or did more than just evaluate your idea, then you would be able to sue them for breach of contract. 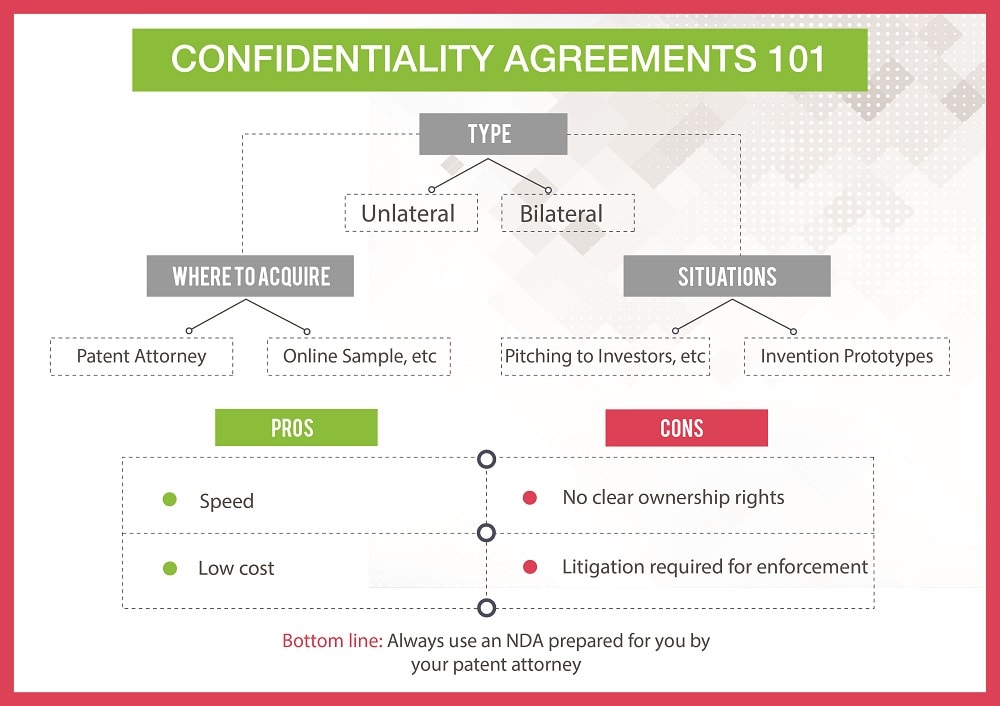 Not all investors, licensee and buyers will sign the confidentiality agreement.

For those entities that will not sign the confidentiality agreement, you cannot tell them about your idea–  if you do, then you risk the possibility that the party might file their own patent application and be awarded the patent, not you.  Remember, the U.S. is a first-to-file regime and if you didn’t file a patent application and they did, they will be awarded the patent as the first to file.

Inadvertent co-inventorship and confusion around ownership

Another limitation of the use of confidentiality agreements is that ownership of the inventive ideas cannot be traced accurately and co-inventorship situations arise.  This gets especially complicated if the person you are pitching your idea to is the engineer type.  If the other party (e.g., engineer) signs a confidentiality agreement and you pitch your idea to that person but during that meeting, the other party lets you know of another feature that would be useful for your product, the other party owns the invention rights to that specific add-on feature.  That other party conceived of that aspect.  You now have yourself a co-inventorship situation which is undesireable.

What if you tell the inventor you already had that idea before the other party even mentioned it?  You have a dispute as to who the invention belongs to.  Now the investor, licensee and buyer thinks that you are stealing their idea.

Pitch your idea with Patent protection

You can pitch your idea to an investor, licensee or buyer after you secure patent protection (i.e., patent pending status).  This would be the best protection that you could receive.  The reason is that a well prepared patent application would clearly delineate your idea before you pitch your idea. No inadvertent co-inventorship situation is created and there is no dispute as to who owns an idea.

When you file a patent application with the USPTO, you receive patent pendency for any information expressed in the section which describes (i.e., text and drawings) the invention.  If you fail to describe an aspect of the invention, then you do not have patent pendency for that aspect.  Be sure that a full comprehensive disclosure is prepared if you are going to rely on your patent pendency to protect yourself against investors, licensee and buyers copying your invention without authorization.

Caution: Many inventors feel that they can prepare a comprehensive description of the invention on their own.  After all, the inventor knows his or her invention the best, right?  Of all the invention disclosures prepared by inventors, the vast majority of them do not identify the point of novelty accurately and do not describe the invention broadly enough.  I recommend that you retain a patent attorney to prepare an application for you.

Strength: Clear identification of your invention in the patent application

When you prepare a comprehensive description of your invention, it identifies what you conceived without the help of the investor, licensee or buyer.  When you pitch your idea to someone, you can confidently say that you already thought of that idea or aspect of the invention.

Limitations of the patent system: High cost and not guaranteed to get a patent

The cost to prepare, prosecute and get a patent is high.  If all you are doing is pitching your idea and do not have any plans to do anything else with your idea, then it may not be worth the expense to prepare a patent application. After all, if those that you are pitching your idea to don’t invest, license or buy from you, then the patent application is worthless at that point.  If you are going to do more than just pitch your idea to others, then it may be worthwhile to incur the high cost of getting a patent on your idea.