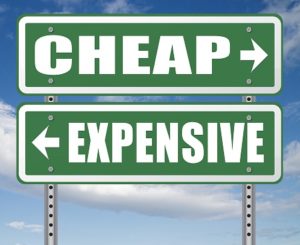 Numerous websites advertise cheap provisional patent applications. The cost for a provisional patent application can be as low as $199 plus a government filing fee ($140 for a small entity). These websites identify the fields of a patent application and require the inventor to fill in the information for each field. The burden is on the inventor to explain how the invention works with enough detail to satisfy U.S. patent law requirements (e.g., written description and enablement requirements). Unfortunately, many laypeople cannot do so because of the complexities of patent law. Also, a patent practitioner (i.e., patent attorney or patent agent) does not prepare or even check the adequacy of the inventor’s work.

While inventors are capable of preparing a patent application to protect their inventions, based on my experience, DIY patent applications are typically not done to a satisfactory level. The difficulties of maneuvering around the various patent laws make it difficult for inventors to adequately prepare their own patent applications even when they understand their own inventions better than anyone. The legal requirements and the way an invention should be described so that the invention is not described in an unduly narrow manner is difficult to achieve. For patent attorneys, it takes years of practice to improve this skill under the mentorship of a senior patent attorney.

Let me explain with an example. To claim an invention, the provisional patent application must be described so that one of ordinary skill is enabled to practice the full scope of the claim. In general, if a species (e.g., one embodiment) is disclosed, then the corresponding genus (e.g., broad generic category) can be claimed provided that the species enables the practice of the full scope of the claimed invention. With this in mind, for example, the issue is whether the disclosure of a mechanical nut and bolt fastener allows one to claim all types of fastener connections, including electromagnets, adhesives, zippers, and welding. Unfortunately, for a lower-priced provisional patent application, the patent practitioner may not have sufficient time to fully explain the full scope of various connection mechanisms. As such, inexpensive provisional patent applications may provide some measure of protection but may fall short of what the inventor expects to receive.

Inexpensive patent applications might explain the point of novelty but not much more. At least, that has been my experience when transferring cases from other patent attorneys and agents. In general, no emphasis is placed on trying to broadly describe the invention or include other variations, options, or ranges of key parameters as potential future backup arguments.

Beware of a False Sense of Security

One dangerous aspect of a cheap or inexpensive patent application is that clients expect their inventions to be “protected,” but may not understand the different levels of patent protection that cheap, inexpensive, and full-up patent applications provide. Inventors expect high quality from attorneys even if the price is low. For inventors and small businesses, especially those who are just starting out, any sum of money, whether it is at the $199 level or $1,500 level, is high.

Because of this, patent attorneys should spend time with the inventor/client so that they understand and appreciate the level of protection they are receiving based on the cost. Unfortunately, when little money is being spent on the application, little time is given to explain the risks, benefits, and what is provided.

Patent applications at each cost tier can provide a strategic benefit to the inventor or business. Patent attorneys should spend the time to educate inventors and businesses about the level of patent protection afforded at each tier, including whether it will provide the value and benefit they need.

This blog post is a republication of my article that I published in Orange County Lawyer.  Here is a pdf download of the article: Provisional Patent Application: Not a cheap alternative to a nonprovisional patent application