You are here: Home / Reasons to only market your invention after securing patent pendency

U.S. patent laws give inventors a one-year grace period to test market your invention.  For up to one year, inventors are allowed to publicly use, offer for sale, and distribute a printed publication of their invention without filing a patent application.  These are the activities that inventors engage in when they market or commercialize their inventions.  Inventors can always file the patent application before the one-year time period is up.  However, if an application is not filed within one year of starting marketing efforts, the inventor is barred forever from seeking patent protection.

Relying on the one-year grace period is not recommended. Although nothing the inventor does personally during that one-year period will bar the inventor from seeking a patent on the invention, the same is not true for the actions of a third party. If a third party gives a public demonstration, makes an offer for sale, distributes a printed publication, or files a patent application related to the invention before the inventor files his or her own patent application with the USPTO, the third party’s actions would be considered prior art and may invalidate the inventor’s patent, as explained below in the section entitled “First-Inventor-to-File Regime.”

Here is the big problem if you market your invention before filing a patent application.  The third party will get the patent even if the third party saw the your invention and copied it, as long as the third party is the first to file. You may have recourse against the third party, but such recourse would require an expenditure of time and money. The unpredictable nature of litigation and related costs would make seeking such redress economically unfeasible. Hence, the one-year grace period should be treated as being solely personal to you (i.e., the inventor) and not necessarily something that they can rely on to be able to safely market your invention before filing the patent application.

This is why you should market your invention only after filing a corresponding patent application and secure patent pending status.  It’s not that you cannot do it.  It is not worth losing patent protection after you have invested all of your time and money into launching your product.

Related article: Be wary of marketing invention before filing a patent application

An inventor risks third-party interference if he or she markets an invention during the one-year grace period before filing the patent application. The third party may observe the inventor’s marketing efforts and file their own patent application first. The first inventor to file regime does not take into consideration the date of an inventor’s conception. Instead, the USPTO only consider the filing dates of the patent applications when issuing a patent. Although there may be some recourse against a third party that submits a patent application on another inventor’s product, such recourse may be expensive to prove and the outcome unpredictable. Therefore, most inventors do not seek such recourse and instead quit marketing and selling their product to avoid patent infringement liability.

Side Note: Another risk of using the one-year personal grace period is the potential waiver of foreign patent protection or loss of ability to file for patents in foreign countries. Many foreign countries require what is known as “absolute novelty,” which requires the inventor to initiate marketing efforts only after filing the patent application. The United States is a “relative novelty” country because U.S. patent laws allow for public disclosure of the invention through marketing efforts for a limited, one-year period before the patent application must be filed.

Market your invention: Starts when any one of the three bars to patentability occurs

The one-year grace period starts when you start to market your invention.  U.S. patent laws describe marketing activities as three distinct activities.  They are public use, printed publication, and offer for sale (see Figure 2 below). This is how you market your invention.  They are also referred to as the bars to patentability and specify the conditions under which the one-year time period starts. 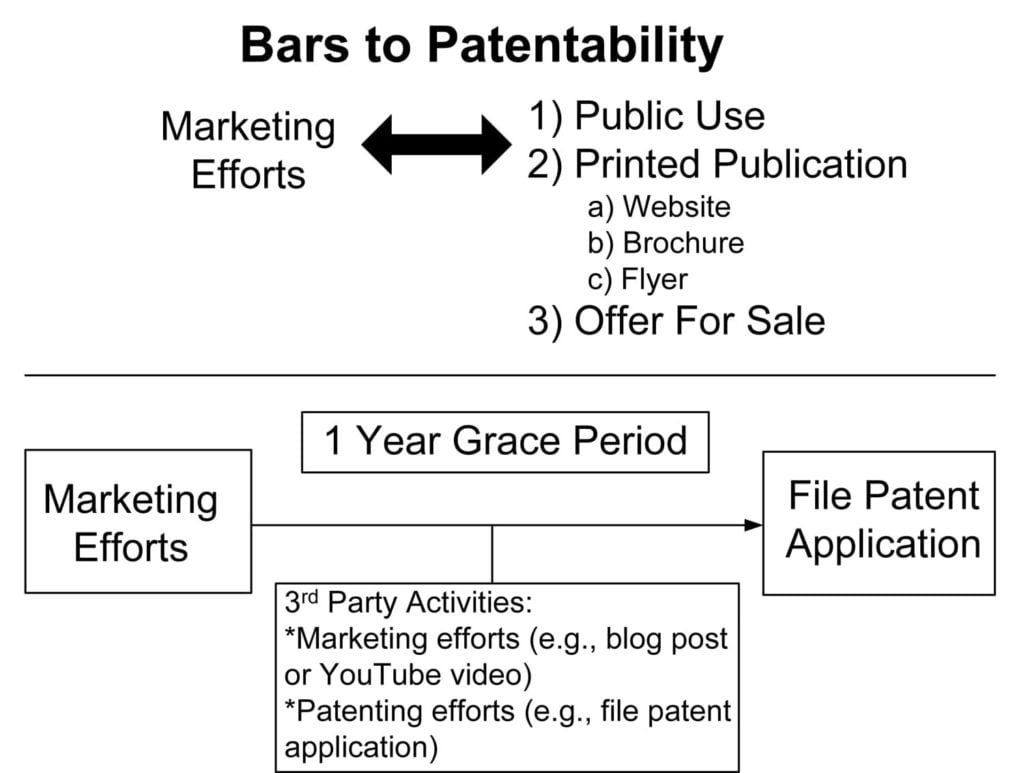 The Three Bars to Patentability: Public use, printed publication, and offer for sale

“Public use” includes any use of the invention where the public has access to such use. Non-public uses may be considered public use even if no one is around to see the product being used. For example, use of an invention by a person who is not under any limitation, restriction, or obligation of secrecy to the inventor would be considered a public use.

Even if the use is public in nature to qualify it as a public use, such use will not be considered to be public use in the eyes of the law, if such use was for the purpose of experimentation.

Related article: Public use bars patent protection unless such use is an experiment

Related article: Online communications can be prior art used against a patent application