You are here: Home / How to respond to an office action?

Some inventors and startups receive a rejection of their patent applications and take it too hard.  They feel as if it is the end of the road for them and that the funds spent were wasted.  At least for the initial rejection, this is not likely to be a waste.

The proper perspective on rejections is important so that you do not get depressed thinking about it.  If this is the first office action and your patent application has been rejected, the rejection in and of itself is not a reason to abandon the patent application process.  The rejection is just the opinion of the examiner.  Of course, the examiner’s opinion matters the most but that does not mean that you do not have options.  See Step 4, below, on what you can do to respond to the office action and convince the examiner to change his or her mind.  However, the rejection in and of itself is not the end of the road.  Even if you cannot convince the examiner, you can appeal the case to the Patent Trademark and Appeals Board.  Don’t get discouraged.  Retain good counsel so that you know your options.

The USPTO’s own statistics show that rejection of the first office action is not a significant indicator in terms of the final allowance of the patent.  The rate of rejection on the first office action is about 90%, whereas the allowance rate for utility patent applications runs around 50% to 60%.  This means that ½ of all patent applications are allowed and issued as a patent after most of them are initially rejected.  Once again, be positive and know that you are not necessarily at the end of the road.  In fact, you may have just begun the real part of the examination stage of the patent process. 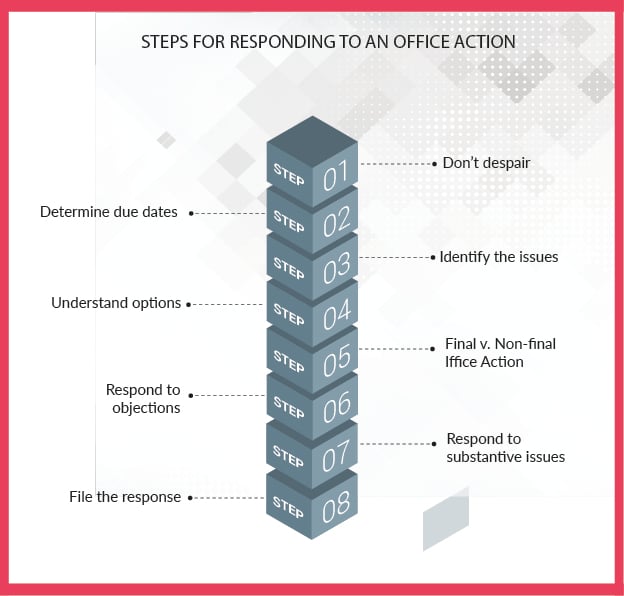 Step 2: Determine the due date to respond to the office action

Step 3: Identify types of issues in the office action

Types of issues: Formalities versus Substantive issues versus an Action on the Merits

Issues related to the substance of the invention refer to:

The issues dealing with the substance of the invention require an understanding of the law and the facts.

Steps for dealing with the common substantive issues are discussed in Step 7 below.

Warning: If you are trying to respond to the office action without the help of a patent attorney, then you need to be careful that you do not amend the specification or the claims or make arguments that will unduly narrow your claims so that they would be easy to design around.

Warning: If you are not represented by an attorney, then the examiner will help you respond to the issues.  However, based on my experience, they do not help you with the scope of the claims.  Many of the suggestions by examiners that I’ve seen narrow the claims and patent protection too much.

Identifying when an Action on the Merits has been rendered

Requirement for a written response

Once you receive an office action, you have a few different options to convince the examiner to change his or her mind.  The Patent Office requires a written response to an office action. See, 37 CFR 1.2.  If you talk to the examiner or the help desk at the patent office, that is not a satisfactory response.  You must put your response in writing and submit it to the Patent Office.

Even though you must submit a written response, you can call the examiner on your case and talk with that person.  See, MPEP Section 713 (Interview).  I’ve found that these telephonic interviews are very helpful in expediting a mutual understanding of the invention and the examiner’s interpretation of the prior art and claimed invention.  Written communication is oftentimes not as efficient and one does not have the instant feedback that occurs during a telephone call.  Written communication is necessary so that the public has a record of what arguments you made.

Related Article:     How to prepare and conduct the telephonic interview?

To schedule the interview, you can call them but the USPTO has also created the USPTO Automated Interview Request (AIR) Form so that you don’t have to waste time scheduling the interview.  Here are answers to common questions regarding interviews: USPTO interview FAQs

Oftentimes, amendments to the claims are made when responding to a rejection based on novelty or obviousness.  Even if you don’t think that the examiner is correct, you may still have to amend the claims.  The reason is that it is difficult if not impossible to actually convince an examiner or someone else of anything.  Rather, a useful perspective is that you are really providing new information (i.e., narrowing of the claim scope) so that the examiner can make a new decision.  In this way, the examiner is not having to be convinced of anything.

Additional evidence can be made of record in the prosecution of the patent application.  For example, a declaration of the inventor can be made of record to establish a fact or an understanding of how one of ordinary skill in the art might understand a particular phrase or term of art.  Test data, unexpected results, commercial success, solution of a long-felt need, and inoperability of the prior art can be submitted as additional evidence.  See MPEP Section 716.01(c).

Asking for a new examiner

Options under a nonfinal office action?

When the office action you are responding to is a non-final office action, then you have all of the options available to you including but not limited to everything in Step 4.  Written arguments and claim amendments can be requested as of right from the examiner.

Options under a final office action?

Generally, the second Office Action on the Merits will be a final office action.  MPEP Section 706.07.

If you are responding to a final office action, then the examiner’s work is essentially finished.  The examiner does not need to consider additional claim amendments and remarks that you might submit in a formal written response.  If you do file a response to a final office action with an RCE (see below), you will receive an advisory action.  You only have a few options moving forward.  You may be able to request a telephone interview.  I’ve been quite successful in requesting these after the final office action.  If so, you would be able to submit a draft response for the examiner’s consideration.  You could submit a formal response with all of the arguments and claim amendments but most likely the examiner will not review them nor enter them into the record.

Read more about the basic strategy of responding to a final office action.

After a final office action, a written response must be filed with a Request for Continued Examination and the appropriate extensions of time before the end of the six-month deadline.  Otherwise, the patent application will go abandoned.   Alternatively, you can also file a continuation patent application.

Step 6: Responding to objections to formalities

Responding to a restriction requirement

A restriction requirement from a layperson’s perspective is merely an opinion of the examiner that the claims presented in the patent application can be categorized into more than one group and that the inventor needs to select only one for examination.

Plus, arguing with the examiner will not be cost-effective.  It is just better to select one of the inventions and move on.

If the objection to the drawings is that lines are not clear and black, then all you would need to do is to have a draft person redraw them to meet the standards set forth by the patent office.  Hire a patent draftsman to overcome these types of objections.  The patent draftsmen that I’ve used in the past are:

Responding to claim issues relating to the antecedent basis

Antecedent basis issues in the claims relate to a simple rule that a component must be first introduced with the article “a” or “an” and then every following instance of the component must be referenced with “the”.  If a component is introduced with the article “the”, then the examiner will give you an antecedent basis objection.  All that needs to be done is to change “the” to “a” or “an”.

If you need to respond to a rejection based on the patentable subject matter, the USPTO provides an entire reference section on how to deal with these issues

A double patenting rejection is a rejection based on the fact that the claims of the current patent application are similar to or the same as a separate patent owned by the same applicant.  In some circumstances, separate patents can have different dates on which they terminate or expire.  The USPTO does not want separate patents with similar or identical claims having different expiration dates.

Responding to a novelty rejection (Section 102)

Novelty and obviousness rejections are the two most common rejections that the examiner will make against a patent application.  The key to understanding how to respond to these types of rejections is understanding the Broadest Reasonable Interpretation standard.  The broadest reasonable interpretation allows the examiner to attribute a meaning to a word that is broader than what an expert or layperson would think that the word might mean.

Here are some examples:

Responding to an obviousness rejection (Section 103)

An obviousness rejection occurs when the examiner is of the opinion that it is obvious to combine the teachings of two or more references to come up with the claimed invention.  Section 2100 of the Manual of Patent Examining Procedure has a complete explanation of obviousness.

Responding to a new matter rejection

Step 8: How to file the response?

The response to the office action must follow a specific format.  The first page of the response identifies the patent application by its serial number, filing date, the title of the invention, art unit, confirmation number, and the name of the examiner.  The amendments to the specification, claims, and drawings each start on a new page if any amendments to these sections are made.  When amendments are made to the specification and the claims, strikethroughs represent deletions and underlining represents additions.  For the drawings, an annotated sheet may be submitted with a clean copy of the sheets to indicate what is being changed.  After the amendments are made, then the Remarks Section provides an explanation of why the patent application should be allowed and a patent granted.  The arguments should match up with the claim amendments and explain why those amendments overcome the examiner’s rejections.

Attached is a sample response that illustrates the format for the response to the office action.

When a response is drafted and ready for submission to the USPTO, it is normally done through the Patent Center.