You are here: Home / Working with others without losing your IP rights

You risk losing your invention rights whenever you work with others on your invention.  How?  Investors might try to file their own patent application thereby being the first to file and win the race to the Patent Office.  Employees who are not hired to invent might own the invention rights, not the company.

Simply put, collaborators (i.e., co-inventors), investors, independent contractors, employees might end up owning, inadvertently or unintentionally, a part of your invention when you engage them to help you.  If so, this fractured ownership of the invention rights might destroy the value of invention.  Let’s take a co-inventor situation which could occurs whenever you collaborate with others (e.g., independent contractor, friends, colleagues, etc.).  Because co-inventors can exploit your technology without any responsibility to you, this would destroy the value in your invention and cannot be allowed to happen. The surprising thing is that you might not even know that you have a co-owner.

Below is an extensive discussion on the main types of relationships or individuals which might cause problems with ownership of the invention.  I discuss how to mitigate the risk of losing your intellectual property.  Many times, startups lose invention rights because they don’t know the law and what they need to do to protect themselves.

How is ownership of invention rights determined? 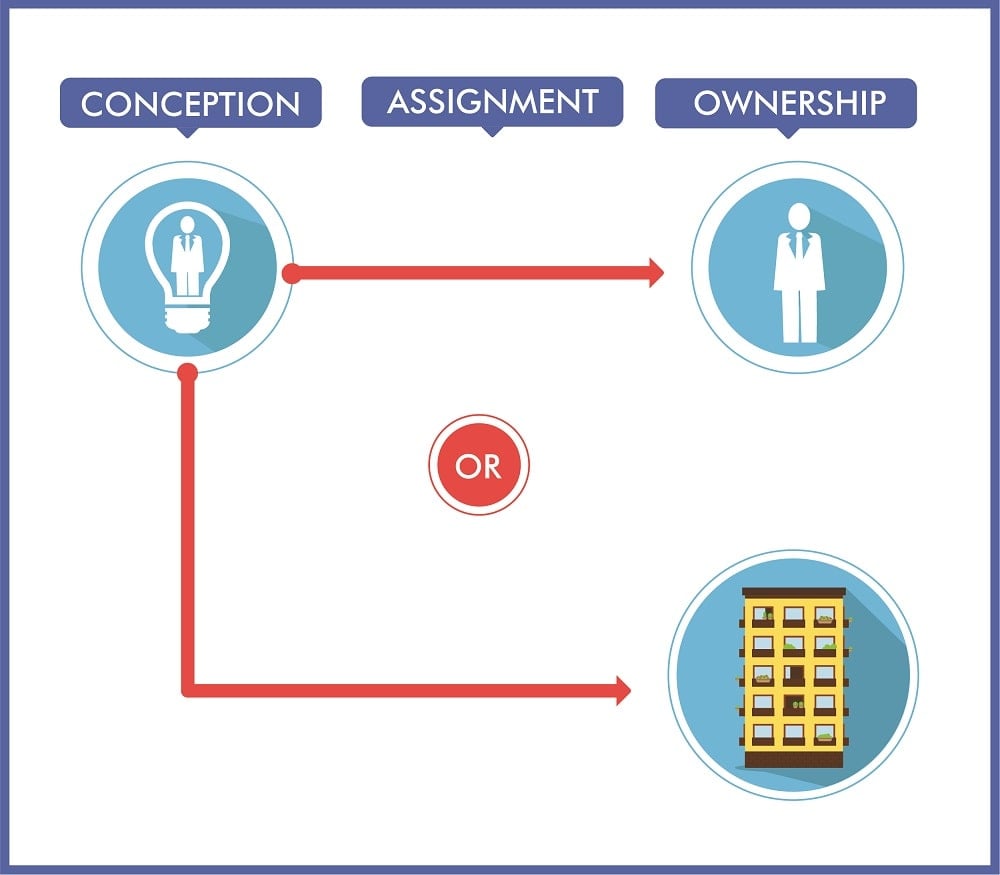 Ownership issues arise in business because collaboration with others is often required to bring an invention to market.  As in our example above, inventors may need to hire engineers.  They may also need to retain manufacturers, product development companies, and others to help them develop the invention or product.  They may also reach out to investors that might require control of the invention rights. 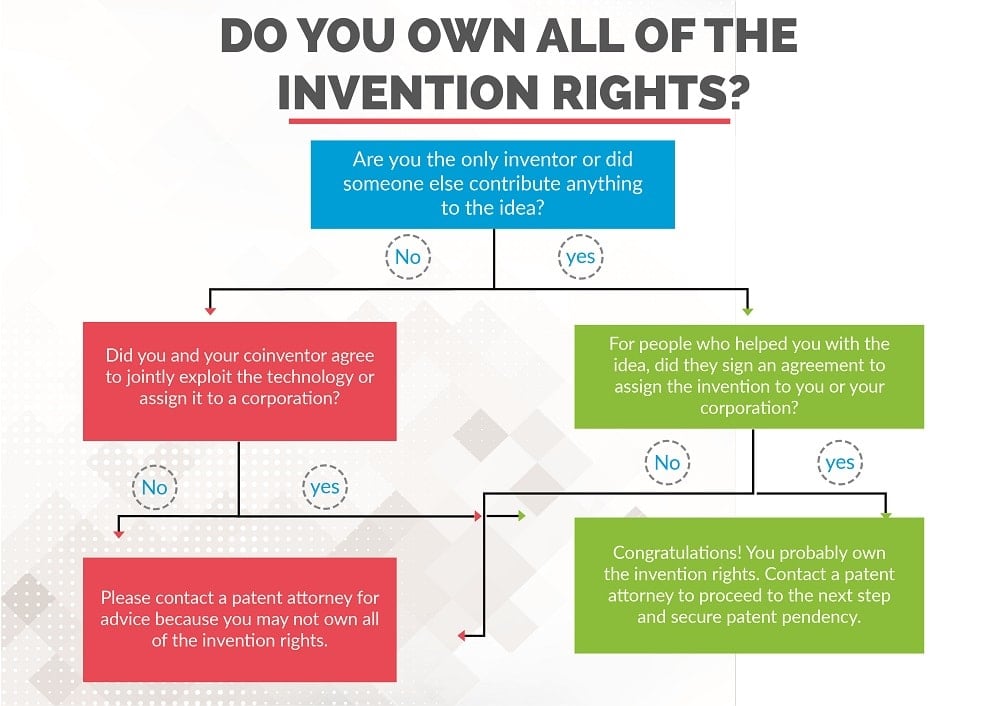 Four (4) types of relationships that can create co-ownership situations and potentially cause problems are:

The discussion below addresses ways to mitigate ownership issues for each type of relationship.

Co-inventorships might arise inadvertently.  For example, a common way is if you were to share your idea with someone and they provide feedback on your device.  If that feedback contributes to your invention, you now have a co-inventor who now co-owns the invention and can exploit the invention without you.  Normally, this inadvertent type of co-inventorship situation arises when a close friend provides feedback on your invention.  Your friend is just providing some friendly advice and feedback and might, at the time, have no desire to be a co-inventor.  However, the law is clear that co-inventorship is not based on the intent of the parties but rather on whether a person contributed to the invention.

Under United States law, each inventor can market and sell the patented invention without accounting for, or sharing, his or her profits with the other inventor(s). Additionally, any of the inventors can act against the interest of any other by dedicating the invention to the public (i.e., allowing it to be designated part of the public domain) even if the other co-inventor does not consent.

One solution to mitigate potential future disagreements between co-inventors is to enter into a “joint exploitation agreement.” In this agreement, the co-inventors mutually agree that they will not dedicate the invention to the public and do other things that might jeopardize the value of the patent.

This can deter inventors from harming the invention owned by the business due to their duty of loyalty to the company. The company can thus control what is done with the invention.

Quite often, inventors want investors to come in and invest their money to help them monetize the invention.  Ownership conflicts may thus, arise in these inventor–investor relationships.

Don’t assign invention or patent rights to the investor

The inventor should not assign the invention rights to the investor. Assigning some of the rights simply creates a co-ownership problem.  Plus, the investor is technically not an inventor.

Both scenarios are not good for inventor and the investor.

Assign invention to corporation into which the investor invests

When you hire consultants, engineers and designers, ownership issues may arise.  How? You are hiring them because of their ability to solve problems.  In this regard, their solutions to your problems are all potential inventions.  Because inventive rights vest with the person that conceives of the invention first, unless an assignment occurs, an independent contractor who conceives of an invention, even a small part, owns his or her part of the invention. If that part of the invention is incorporated into your patent application and the application later matures into a patent, the independent contractor is now a coinventor and owns the patent with you.

Just to clarify, co-inventorship cannot be avoided in this situation but co-ownership can and should be avoided.  If the independent contractor contributed ideas to improve your invention, that person is a co-inventor.  However, through the assignment, the co-ownership of the invention is avoided.  You are paying the independent contractor to create and develop your idea and should be able to own and exploit their improvements to your invention.

Many companies at their inception are small and funds are tight. These companies may not have formal employer–employee agreements, wherein the employee agrees to assign all invention rights to the company. In the beginning, these startups may rely on the friendship that they foster with the employees.  As companies grow, they may continue to rely on goodwill and tight-knit relationships between employers and the employees. However, this goodwill is not enforceable in a court of law.

Companies need to plan for conflicts with its employees.

Employers should enter into an invention assignment agreement with employees. Without it, the employee may retain his or her invention and the invention rights would not actually belong to the employer. These assignment agreements are desirable for project developers, sales personnel who come up with ways to improve the company’s product, and/or employees involved in manufacturing who might have insight into the most efficient way of making products.

Do seek the advice of an employment attorney

This is one area where there is a cross over between an employment attorney and an intellectual property attorney.  In most instances, if you are looking for an invention assignment agreement for your employees, then you are also probably looking for other employment agreements.  As such, it would be more efficient to retain an employment lawyer to prepare all of the form documents that you want your employees to sign.