On June 19, 2018, the United States Patent and Trademark Office (USPTO) granted its 10 millionth patent. Since the inception of the patent system and grant of the first patent, the rate of technological improvement has increased 25-fold as discussed below.

The 10 millionth patent (i.e., U.S. Pat. No. 10,000,000) was for Coherent LADAR using Intra-pixel Quadrature Detection. LADAR stands for laser detection and ranging. Put simply, the invention was for detecting objects such as cars with an optical detector. The specific technology described in USPN 10,000,000 may not be significant, but it is a good time to humbly look back and recognize the collective technological improvements of people and appreciate the ingenious mind granted to man by God.

Overview of the 10 million patents

Above is a table of patents at each million-patent grant milestones. We can see two different trends.

First, we can see the direction of technological improvements. At the inception of the patent system, the United States was in a sort of a caveman primitive state. We were focused on wheels and tires. We are now patenting in areas of sensing cars. 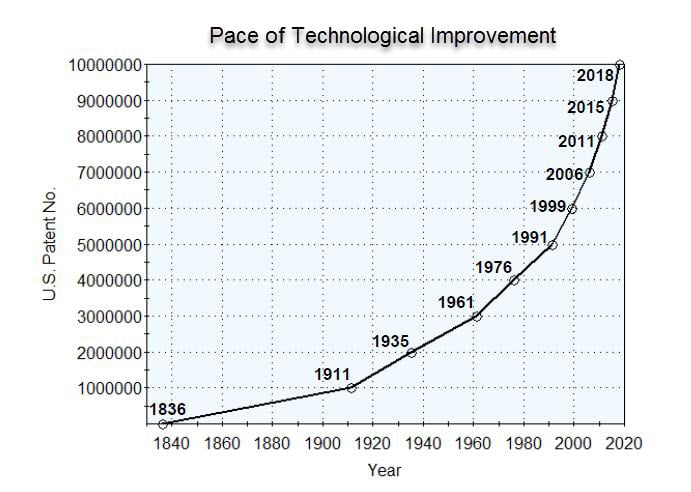 Looking back at these patents, one can’t stop but think about what all 10 million patents represent:

First, they represent the collective ingenuity of the inventing community.

Third, the 10 million patents represent millions and billions of dollars in research and development that the public and competitors did not need to spend to make and use the patented technology.

If not for the patent system, many of the inventions would remain in someone’s garage or utilized as a trade secret without ever being transferred to others.

Congratulations to the inventing community and to all the people at the Patent Office that make the patent system function.

More innovation is still to come

Friends, family and laypeople, not familiar with the patent system, are amazed that innovation still exists today.  In some ways, I am also amazed that the USPTO has issued its 10 millionth patent.  However, as long as we would want to do something faster, cheaper, easier, more efficiently, those means of doing so are all inventions ready to get patented.

25-fold increase in the rate of technological advances since 1836

As I mentioned above, the initial patents were directed to wheel and rim devices.  It might appear that technological advances have moved on from wheel and rims to self-autonomous cars.  However, that simply is not true.  There is still more to be invented, even in wheel and rim technology.  We now have improved tread designs to achieve better traction (See USPN 8,215,568) or tire technology related to tire tread wear sensor (See USPN 7,180,409).  In other words, even if you are not in an emerging area of technology shown in mainstream media, you can still innovate in your area of expertise.  Don’t give up hope.