You are here: Home / Patent Infringement / Patent Claim / What is a patent claim?

Structure of a claim

Each claim has a preamble, a transitional phrase, and a list of elements.  Each part of a claim serves a purpose in determining the scope of the claim.

Here is a sample claim for a wooden pencil. 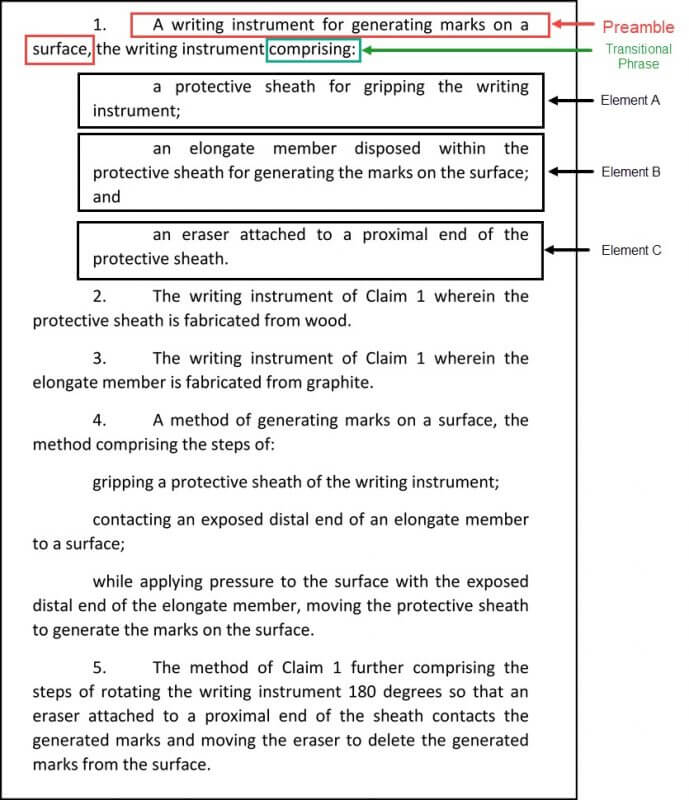 The preamble determines the context of the claim.  In the example above, the preamble is “A writing instrument for generating marks on a surface.”  In this regard, the claim is directed to an apparatus.  The field of invention is writing instruments.  Sometimes, preambles limit the scope of the claim if they “life and breath” into the claim.  For example, if the list of elements refers back to the verbiage of the preamble, life and breath are said to be breathed into the claim.

The claims are arranged in numerically ascending order starting from the number 1.

The claims collectively are referred to as the claim set.

A claim can protect an apparatus or a method.  We may refer to product patents, software patents, and process patents.  But, the bottom line is that all claims are either directed to an apparatus (i.e., a thing) or a method (i.e., a series of steps).

The words of a claim are given the ordinary and customary meaning based on the written description of the invention, the arguments presented to the examiner, and other outside sources as one having ordinary skill in the art would have understood those words at the time of the invention was made.

How to determine infringement of a claim?

If the product included additional features (represented by D in Scenario 5), literal infringement still exists because the product incorporates all of the elements A, B, and C.

How to write a patent claim?

The first step in writing a patent claim is to identify the point of novelty of the invention.  How is your invention different from the rest?  You should be able to describe your invention in a sentence or two which is your unique selling proposition.  All other aspects of your invention peripheral to or unrelated to the USP should not be listed as an element in the independent claim.

After you identify the point of novelty, you need to write the preamble, transitional phrase, and list of elements. The preamble ought to be straightforward.  If you can’t think of anything, just write “An apparatus” or “A method” for [insert the benefit of your invention].

The transition phrase should be “comprising.”  The vast majority of all claims use this transitional phrase.

For the list of elements, think of things that are common to all products within the field of the invention.  For example, in writing instruments, most if not all would have a protective sheath.  As such, although it limits the claim scope, in many ways, it doesn’t limit the claim scope in a significant way.  All competitors to the wooden pencil example above would have a protective sheath.

Learn more about the basics of writing a patent claim.