You are here: Home / Cool Ideas / Top Innovators in Orange County, According to USPTO 2017 Filing Data

Why innovation matters to Orange County?

Innovation matters to the local economy where innovation occurs.  Innovation brings jobs and revenue to the local economy.  We can see that innovation has helped develop new products that otherwise would not have been created.  But for the incentive of a patent, many new drugs that have high research and development costs but are easy to copy once they are available to the public would not have been invented and brought to market.  The patent data for Orange County, California shows that the top 2 innovative companies are in the fields of medical devices and pharmaceuticals.  Patent protection also offers inventors and businesses the opportunity to secure new funding for startups and small businesses.  New products and processes mean new businesses, more jobs, increased efficiencies, and more opportunities.

The data below focuses on the 4 most innovative OC companies.  Why the top 4?  The reason is that the number of patents for each company below the top 4 dropped off significantly compared to the top 4.

The companies in the top 4 are based on the number of patents issued to the companies for the year of 2017, according to data at the United States Patent & Trademark Office.  The data below cover not only the number of patents issued, but also the top areas of innovation, the top innovators at those companies, and other statistics.  The data show the relationship between the important areas of innovation in each company, as well as the more-prolific inventors in the company.

How far above “average” are OC’s top innovators? 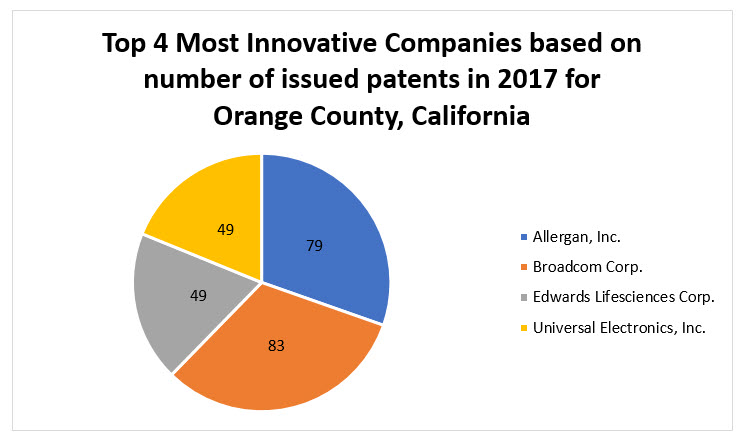 What industries are the top innovators in?

The data below shows that the top innovators in Orange County, California invent in the areas of pharmaceuticals, medical devices, software, and electronics.

Which companies are the top innovators in Orange County?

The most innovative companies in Orange County, California are:

Allergan plc (NYSE:AGN) is a global pharmaceutical company.  On its website, Allergan boasts commercial operations, manufacturing, and R&D in more than 100 countries.  Although Allergan is headquartered in Dublin, Ireland, the company assigns most of its patents to Allergan, Inc., based in Irvine, California.  A search of the USPTO database shows that the USPTO assigns a few patents to Allergan Industrie SAS in Pringy, France, and Allergan Pharmaceuticals International Limited or Allergan Holdings Unlimited Company, which are located in Dublin, Ireland.

Top areas of innovation for Allergan

A patent will list the inventors that contributed to the invention.  Collectively, they are known as inventive entities.  At Allergan, an average of 2.3 inventors were listed on each patent granted.[2]  In a sense, this indicates the level of cooperation between departments and innovators within the company.  A higher number might indicate a more collaborative environment between people in the R&D department of the company.  A lower number might indicate that people in the R&D department work independently and in silos instead of collaboratively.

When the same inventor is listed on multiple documents, this may indicate that the individual is the main driver of innovation for the company, a group, or a particular technology within the company.

Table 2 lists the top 4 inventors based on the number of patents for which they were included as part of the inventive entity.

Top Allergan inventors in CPC Subsection A61 are shown in Table 3.

In 2016, Broadcom Corp. (NASDAQ:AVGO) located in Irvine was merged with Avago Technologies located in San Jose, California.  As such, the current patent assignment data for Broadcom appears to be the remains of the merger between Broadcom and Avago, and may not accurately reflect the total number of patents granted to Broadcom.  Eventually, I suspect that Broadcom’s patent applications will eventually be assigned to Avago Technologies, not Broadcom.  Just as an FYI, in 2017, Avago was granted 874 patents.

Broadcom primarily innovates in electric communication techniques.  As shown in Table 4, They were awarded 53 patents in 2017 in this area of technology.  This represents 64% of the total number of patents granted to Broadcom.  This is aligned to their core business as a supplier of semiconductor technologies within four primary markets: wired infrastructure, wireless communications, enterprise storage, industrial, and others.

On average, 2.3 inventors were listed on each patent.[3]  Broadcom and Allergan reflect the same level of teamwork to innovate between departments and innovators within the company.

Table 5 lists the top 3 inventors based on the number of patents for which they were included as part of the inventive entity.

On average, 2.5 inventors were listed on each patent.[4]  The data suggests that Edwards Lifesciences has the greatest level of cross-pollination of ideas between departments and innovators within the company compared to Broadcom and Allergan.

Table 8 lists the top 5 inventors based on the number of patents for which they were included as part of the inventive entity.

Top Edwards Lifesciences inventors in CPC Subsection A61 are the same as the list above because Edwards focuses their patenting efforts to be narrowly tailored into their niche area of innovation.

Universal Electronics Inc. (NASDAQ: UEIC). is a worldwide leader in universal control and sensing technologies for the smart home.  They have four main innovative areas of technology: connectivity, device discovery and control, voice control and advanced navigation, and integrating smart devices into home entertainment, as shown in Table 9.  According to the USPTO database, their primary area of innovation is in CPC Subsection G06 which is related to Computing; Calculating; Counting.  50% of their patents in 2017 were related to this field.

On average, 1.02 inventors were listed on each patent.[5]  Below is a list of the most prolific inventors.  The data shows that these three inventors work independently of each other.

Table 10 lists the top 3 inventors based on the number of patents for which they were included as part of the inventive entity.

Top Universal Electronics inventors in CPC Subsection G06 are the same as the list above because it appears that the innovative engine of the company is focused on these individuals.

Because of the two of the top 4 most innovative companies in Orange County, California.  It might also be interesting to track the number of other pharmaceutical companies that come into the local area in the future.  Based on the average number of inventors on patent data, anecdotally it appears that the more successful companies have more of a collaborative environment in which R&D occurs.