Design patents protect the aesthetic design of a product and not its utilitarian features. Inventors are often drawn to a design patent in lieu of a utility patent due to its lower cost. However, seeking a design patent when a utility patent is necessary will not meet the needs of the inventor. Furthermore, though design patent applications are mechanically simple to prepare, they nonetheless require careful attention to detail when preparing the drawings.

The purpose of a design patent application

Design patents are limited in that they protect ornamentation only (e.g., the product appearance). For example, if competitors copy a design or look but make significant enough aesthetic changes, they may avoid design patent infringement liability altogether. Moreover, a design patent is not always necessarily effective for protecting ornamental design in all circumstances (see Introduction to Section 2 for specific circumstances in which a design patent may be useful).

By contrast, a utility patent protects the functional aspects of an invention (i.e., its structure or the steps of the patented method), but is not contingent on the design or look of the product for the scope of patent protection it affords. Since design patents and utility patents protect different things, seeking both may be beneficial in certain instances, as discussed in Deciding what application to file: Design or Utility? Section.

The drawings of a design patent application: Defining the claimed design

A design patent application appears simple to prepare, as it only requires drawings of different views of the product to show an ordinary observer what the product looks like. In general, a three-dimensional, perspective view is provided along with views of the front, back, top, left, right, and bottom (to see examples of these views, see Appendix C). These seven views are normally, but not always, sufficient to determine all the ornamentation to be protected by the design patent. Additional views may also be necessary to fully illustrate the design. For example, a cross section view of the product may also be included to show blind crevices that would not be visible with the standard seven views.

The drawings may also convey the environment in which the product is used, but it should be made clear that this is not a part of the design being protected by the design patent. For example, the frame of a bicycle would constitute part of the environment for a patented rear suspension of a mountain bicycle. The environment is included to bring context to the part being protected by a design patent. To accurately reflect what is and is not protected by the design patent, the environment, and anything for which protections are not being sought, should be drawn in dash dot lines (i.e., phantom lines). The product and the ornamentation that the inventor wants protected should be drawn in solid dark lines. The design of the rear suspension should therefore be placed in solid lines and the frame of the bicycle along with all other components in phantom lines.

Just as including multiple features in one design application can unduly narrow the scope of the patent’s protection, so too can adding unnecessary details to any given feature in the application. When more details are added to the drawings, a third-party would have to incorporate all those features to infringe against the design patent. For example, in the case of Arc’Teryx Equip, Inc. v. Westcomb Outerwear, Inc.,11 Arc’Teryx sued Westcomb for patent infringement on its patented jacket. Westcomb was selling a jacket aesthetically similar to Arc’Teryx’s. However, the zipper on Westcomb’s jacket did not come up the center and up under the chin but instead was offset to come up to the side of the chin. The District Court held that the defendant (Westcomb) did not infringe on the design shown in Arc’Teryx’s design patent based on the visual differences between the zipper designs of the two jackets. The zipper in Arc’Teryx’s design patent has two sections while the zipper of Westcomb’s jacket has three sections (see Figure 5 below). Arc’Teryx (the patent owner) did not include variants of its offset zipper in its design patent. Westcomb (the defendant) was therefore able to utilize a design that looked different to avoid design patent infringement. In some cases, as in Arc’Teryx’s, it is important to protect variations of a design for broader protection even if those variants are not being sold. 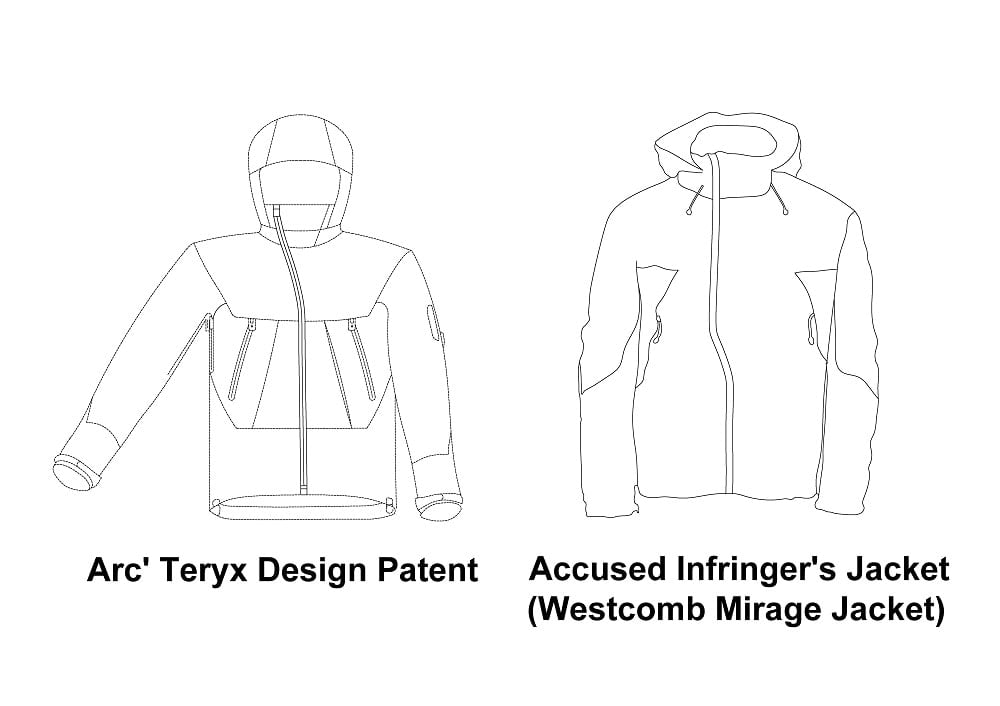 To mitigate such easy design arounds, multiple versions (i.e., embodiments) of the same product can be incorporated into a single design patent application. The design patent application could then provide protection for alternative embodiments and variants of the product. In the case of the jacket above, the inventor could have  included different configurations of the multi-section zipper and secured more patents on similar designs to make it more difficult to design around a portfolio of design patents. However, this technique may be expensive since additional drawing sheets and design patents incur extra fees, but it may be worth the expense.

10. The design patent application contains a specification and drawings. The specification contains a simple statement claiming “a design as shown in the drawings” and a generic description of the various drawings. The generic description of the drawings is a simple labeling of the views that are shown. An example of this section can be seen in the example design patent application in Appendix C. This section only deals with the drawings.